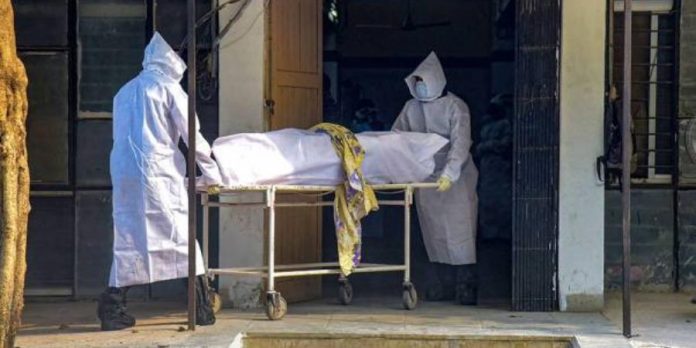 A 90-year-old woman who died after falling ill with Covid-19 was infected with both the UK and South African variants at the same time, scientists in Belgium have revealed.

The woman, who lived alone and received at-home nursing care, had not received the vaccine and was admitted to the OLV Hospital in the Belgian city of Aalst – around 17 miles from Brussels – after a spate of falls in March. She tested positive for Covid-19 the same day.

While her oxygen levels were initially good, her condition deteriorated rapidly and she died five days later.

When medical staff tested for the presence of any variants of concern they found that she was carrying both the Alpha strain, which originated in Britain, and the Beta variant first detected in South Africa.

Researchers believe it is the first documented case of its kind and is a warning, although rare, dual infections can occur.

The idea of multiple infections isn’t completely new. In January, Brazilian scientists reported two cases of COVID-19 co-infection, but the study hasn’t yet been released in a scientific journal. Researchers have also previously found evidence of people becoming infected with multiple strains of influenza. The cases suggest co-infection might be more common than currently known.

Molecular biologist Anne Vankeerberghen from the OLV Hospital who led the research said: ‘Both these variants were circulating in Belgium at the time, so it is likely that the lady was co-infected with different viruses from two different people,’ said ‘Unfortunately, we don’t know how she became infected.’

Vankeerberghen said it was difficult to say whether the co-infection played a role in the fast deterioration of the patient.

The research, which has not yet been submitted to a medical journal for publication, is being presented at the European Congress of Clinical Microbiology & Infectious Diseases.

While Vankeerberghen said there had been ‘no other published cases’ of similar co-infections, the ‘phenomenon is probably underestimated’, she added via a press release.

This is because of limited testing for variants of concern, she said, calling for an increase in the use of fast PCR testing to detect known variant mutations.

In January, scientists in Brazil reported that two people had been simultaneously infected with two different strains of the coronavirus, but the study has yet to be published in a scientific journal.

In comments reacting to the research, Lawrence Young, a virologist, and professor of molecular oncology at the University of Warwick said it was not a surprise to find an individual infected with more than one strain.

‘This study does highlight the need for more studies to determine whether infection with multiple variants of concern affects the clinical course of Covid-19 and whether this in any way compromises the efficacy of vaccination,’ he added.

New versions or variants of Covid-19 are constantly appearing due to mutations in the virus as it spreads.

Some of these variations give the virus new advantages, such as becoming more contagious or being able to dodge existing antibodies from past infection or vaccination.

The strains capable of doing this are being monitored by scientists and are called ‘variants of concern.’

Researchers at Feevale University made the discovery after swabbing 90 infected people in the Rio Grande do Sul, southern Brazil.

One of the patients tested positive for two Brazilian strains which evolved separately in different states, known as P.1 and P.2.

No research has yet been published in a scientific journal or scrutinized by other scientists, however.

In February, Dr. John McCauley, director of the Worldwide Influenza Centre at the Francis Crick Institute in London, told MailOnline it was possible for someone to get infected by two strains at the same time, which can happen with the flu.

He warned that, while unlikely, it was also biologically possible the two strains could interfere with one another and swap genetic code.

‘Getting one strain up a nostril and another up another nostril doesn’t matter…but (the risk is) if they get to the back of the throat and then go into the same cell – then there’s an opportunity for this to happen.’

Such instances also raise questions over how much protection vaccines can provide. With the rapidly spreading delta variant now the dominant strain in many places, including the U.K., drugmakers are rushing to test their shots against variants and create new versions that could provide a better defense.

Countries are also mulling whether to offer booster shots this winter to guard against diminishing responses from vaccines. – Agencies

FULL TEXT: Statutory Instrument On New $10 and $20 Banknotes In Zimbabwe