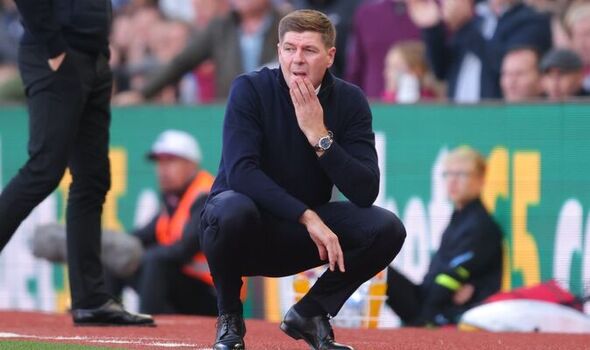 Villa has won just twice in the league this season and only sits above the relegation zone on goals scored.

A club spokesman said: “We would like to thank Steven for his hard work and commitment and wish him well for the future.”

Gerrard succeeded Dean Smith as Villa manager in November 2021 after leaving his role at Rangers.

But the former England and Liverpool midfielder, 42, led Villa to only 13 wins from 40 games during his 11 months in charge.

After the defeat by Fulham, he told BBC Match of the Day: “Inconsistency has cost us, that’s the position we find ourselves in. I took over the team in a very similar situation. We’ve tried to recruit to get us out of that situation.

“I’m a fighter – it’s in my DNA. I’ll continue to fight unless I’m told differently.”

About an hour later his time as Villa boss was over.

Before Gerrard’s departure was revealed, captain John McGinn said: “It’s embarrassing to be part of. We’ve let the traveling fans down, the manager down. It’s a bad night for us.

“It doesn’t matter who’s in charge of that team. It’s nothing to do with the manager – the players have to look at themselves in the mirror. We’ve definitely not lost faith in [the manager] – it’s us who are responsible.

“He’s a top manager, he’s hurting just as the players are. We’ve let him down tonight. It’s up to us now to put in a performance for him.”

In Gerrard’s time at Villa, he signed some high-profile players including Barcelona forward Phillipe Coutinho, Sevilla defender Diego Carlos and French midfielder Boubacar Kamara, who had been linked with some of Europe’s top sides.

However, Carlos suffered a serious ankle injury on his home debut and Kamara is expected to be out until the new year with a knee ligament injury sustained against Southampton last month.

In the summer Gerrard removed England defender Tyrone Mings as captain and replaced him with Scotland’s McGinn – who has made a poor start to the season.

Gerrard’s assistant Michael Beale, who had been with him since Rangers, left Villa in the summer to become QPR manager.

Gerrard, who played 710 times for Liverpool, took his first steps in senior management with Rangers in 2018 and guided the club to their first Scottish Premiership title in 10 years.

Prior to that, he coached within Liverpool’s academy before managing the under-18 team during the 2017-18 season.

Leicester manager Brendan Rodgers, who has also been under pressure recently, managed Gerrard at Liverpool.

“I’m bitterly disappointed for Steven, he did a fantastic job at Rangers and the ambitions at Villa, I assume, are to be challenging for Europe,” Rodgers said.

“It seems every day a manager loses his job or their job is under threat. I think stability and patience seems to be running out.

“I believe with time and patience he could have got to where that football club wants to go.”