The 17-year-old forward had an impressive season with Yeovil Town’s Under 18 side.

He joined the club last year after not being offered a scholarship by his dad’s former club Portsmouth, who are now plying their trade in the 3rd-tier League One. 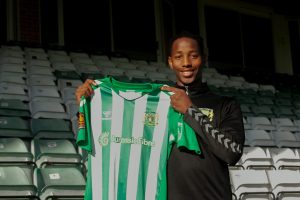 Since his arrival at Yeovil Town, Benjani Jnr has become something of a goal machine which has resulted in him becoming the team’s third professional player in three years to come from within.

In a statement on their official website, Yeovil Town said they are excited to agree on pro-terms with Benjani Jr after his impressive stint since his arrival at the National League side. The club said:

Yeovil Town are delighted to announce that Benjani Jr has signed professional terms with the Club. Arriving from Portsmouth in January 2020, the youngster made an instant impression, playing up a year group in the EFL Youth Alliance League.

With the 17-year-old signing his first professional contract, it means an Under-18 player has signed professional terms with Yeovil Town for the third season in a row, continuing the previous success of Ollie Haste & Toby Stephens.

Following in the footsteps of his father, who was also a professional footballer for the likes of Manchester City, Portsmouth & Auxerre, Benjani Jr now makes his first steps in the professional game.

Last season, the young forward scored 25 goals and managed 16 assists in 30 games for the Under-18 side.

He was also the top scorer as the Under 18’s won the national college seven-a-side tournament. He also enjoyed involvement with the first team, making his Somerset Premier Cup debut as a substitute.

Yeovil Town manager Chris Hargreaves commented said Benjani Jr will continue to play for Matt Percival’s Under-18 side and train with the first team on a regular basis.