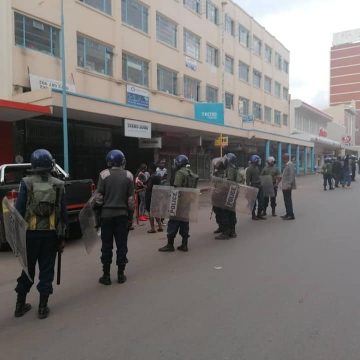 The iconic, but non-imposing six-storey building located along Nelson Mandela in the Harare CBD has for the past 20 years been known as the bedrock of opposition politics, following the formation of MDC which was then led by its now late founding president Morgan Tsvangirai.

MDC Alliance spokesperson, Fadzayi Mahere Friday claimed the police and army were now manning the building with a group of armed soldiers camped inside the building.

This was after reinstated MDC-T secretary-general Douglas Mwonzora on Thursday night, with the help of soldiers and police officers, took over control of the building from MDC Alliance internal security.

“At approximately 10 pm on the 4th of June 2020, a truckload of armed soldiers and police officers assisted 20 youths to forcibly gain entry into the MDC Alliance Headquarters, Harvest House,” Mahere said Friday.

She claimed the soldiers severely assaulted security personnel manning the building before they locked themselves inside the building.

“The MDC Alliance secretary-general, Charlton Hwende immediately attended the scene and tried to make a police report. The Zimbabwe Republic Police refused to take the report and advised that he should speak to the soldiers who in turn denied the secretary-general entry to the building,” Mahere said.

However, contacted for comment, ZDF spokesperson Colonel Overson Mugwisi asked why one could believe MDC Alliance’s claims that the military was occupying the building.

“I cannot confirm or deny that the army has occupied the Harvest House. I am not on duty myself I am off duty. You can confirm with those on duty or confirm with the police. Why do you believe what they (MDC Alliance) say?” said Mugwisi..

ZRP spokesperson Paul Nyathi told NewZimbabwe.com that he was not aware there was any joint operation involving the army and police to occupy the building.

“I am not aware of any occupation of the army and police. If it involves the army you should confirm with their PR (public relations) offices,” he said.

However, Mwonzora on Thursday confirmed he was assisted by the police and army to gain control of MRT House, but the State security agents were in town enforcing lockdown regulations.

Mahere insisted the MDC Alliance was the legitimate owners of MRT House, which is owned by trustees and the takeover by MDC-T was illegitimate.

“Harvest House is held in trust on behalf of the MDC Alliance. The trustees are known. It’s on record. If anyone wants to know about that, the trust documents are available,” she said.

“The critical thing is, there is no court order to evict us. You don’t take the law into your hands even if they believe they have a right to the building which I assert they don’t. If what they are doing is competent, why aren’t they using the Deputy Sheriff? Why are they coming in the middle of the night? Why are they using soldiers? Why are those soldiers armed? That’s not how you enforce the law.”

Police Friday afternoon arrested MDC Alliance co-vice presidents Tendai Biti and Karenyi Kore who were leading a team of party faithful into the building to address the media. Five other senior officials were also arrested and are all expected to appear in court this Saturday.

Meanwhile, the US Embassy in Harare said it was dismayed by the politicised use of national security to takeover the MRT House and the arrest of senior MDC Alliance officials.

“We are dismayed by the politicised use of security forces to take over the headquarters of an opposition party and arrest its members. A healthy democracy requires healthy opposition parties,” it said.