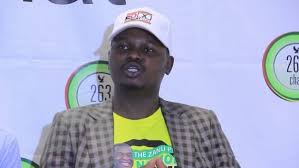 ZANU PF Director of Information and Publicity, Tafadzwa Mugwadi has claimed that Joannah Mamombe, Netsai Marova and Cecilia Chimbiri choreographed their disappearance to have attention.

He said that the same script was used by Dr Peter Magombeyi and local comedian Samantha ‘Gonyeti’ Kureya who alleged last year that they had been kidnapped by state security agents.

These remarks come when the opposition Movement for Democratic Change (MDC) and some Diplomatic Missions in the country including the United States (US) and the European Union (EU) have alleged that the said kidnappings and harassment of the trio was undertaken by the state.

The trio disappeared during a flash demonstration that was held on Wednesday in Warren Park and was found dumped in Bindura on Thursday night.

Police announced the arrest of the trio and later disowned the statement saying they were not aware of their whereabouts.