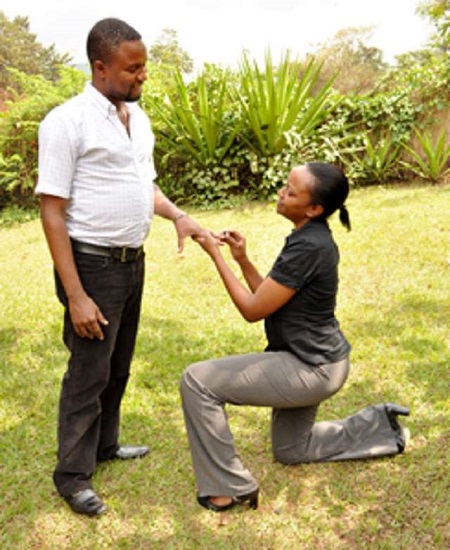 Women proposing to men is fast becoming the new trend. The unspoken rule that all women should wait for the men to get on one knee and pop the question to happily ever after is slowly fading as some women have begun to flout the norms and get on one knee in return as a reaffirmation of their devotion to their men.

Sisters are now taking matters into their own hands by being actively in charge of the love trajectory of their lives.

Let’s get into it

“We saw each other across the room and we both felt something,” Sarah said. After dating for a few years, Ramiro popped the question to Sarah and she of course accepted. That’s the typical engagement story. However, a year later, Sarah got down on one knee too and asked Ramiro to marry her.

“And it was crazy because we were already engaged, but I was so nervous to do it, just thinking about what I’d say to him. I was like is he gonna say yes?” Sarah said. Ramiro added: “It was perfect. I can’t even describe the emotions I felt and still do.”

Sarah even surprised him with an engagement ring that matched the one he had given her. “It felt like my way of reaffirming that I wasn’t just passively saying yes to his proposal, that I like truly was committed to him,” she said.

Another woman, Skier Lindsey Vonn grabbed the headlines when she asked her fiancé to marry her, she stated on social media that men should get engagement rings too.

According to a Pinterest report, the number of people searching for “women proposing to men ideas” skyrocketed to 336% from the year before. Professional matchmaker Michelle Frankel reiterates that this new trend is about gender equality.

“If a woman wants something she goes after it in the workplace,” she says, “She wants to live her life with a man, why wouldn’t she choose to go after that and propose?” Sarah and Ramiro said that moment will forever in etched in their memories.

“His eyes were welling up with tears, and I could just see in his face that he knew in that moment how deeply I loved him,” Sarah said. The couple looks forward to many more special moments as they spend the rest of their lives together.