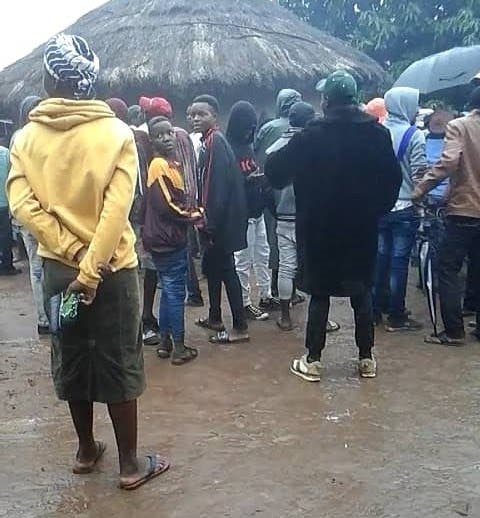 Woman who spent 40 years leaving with mermaids has long hair and reeds. Rowai Chihwakwa, of Matande village under Chief Negari, disappeared in 1982 as an eight-year-old girl, only to reappear last month following a series of rituals spanning two weeks at the site of her disappearance.

The woman who recently hogged the limelight after reappearing from the world of mermaids made her first public appearance on Sunday, December 06, following several weeks under the restrictive care of Zaka female traditional healers who helped secure her reappearance.

After her reappearance, the n’angas took her to Zaka where they cared for her while helping her to adapt back into the real world.

At a ceremony held at the Chihwakwa village homestead in Mwenezi East, Rowai, who donned a crown of feathers that are common with n’angas, did not say much as she seemed to be disinterested or at least indifferent to the many curious faces around her.

Flanked by the n’angas, Rowai’s body was wrapped in a colourful cloth commonly referred to as Zambia. Her head was veiled, with her face hardly visible in the hut where she sat on a mat, with a neatly-woven reed basket containing an assortment of sangoma paraphernalia right in front of her.

It is believed that if a person is snatched by mermaids and he/she spends several years with them, the person – if the necessary rites are performed and members of the family do not sound ‘unnecessary’ alarm or cry – would come back a connoisseur in traditional medicine with knowledge of remedies to virtually all ailments and abnormalities like cancer and infertility.

At the rain-soaked ceremony, Rowai looked strikingly light in complexion perhaps as a result of her prolonged stay in a paranormal world where sunlight and its scorching effects are said to be non-existent.

She hardly looked like one in her late 40s and approaching her 50s, but rather like a post-pubescent girl, or perhaps in her 20s at the very maximum. Hordes of people from the length and breadth of the district braved the rains and thronged the homestead to witness what many locals considered to be rarer a wonder than a solar eclipse.

People tucked away their phones obediently after the family banned cameras, with well-known sangomas and traditionalists of the district threatening supernatural calamity to anyone who would try to snap a shot of the intriguing woman.

The large gathering of visitors could only but take a glimpse at the mysterious Rowai, who has now assumed a larger than life character in an area which is short of local heroes.

In response, Rowai would simply nod her head in acknowledgement or mumble two or three barely audible words.

After much painstaking effort to get the Chihwakwa family to release more details about the returnee, TellZim News finally managed to speak to Loveness Maponde who reluctantly revealed that after several days of trying, Rowai was now able to eat like any other person.

“As you might have seen for yourself, the girl is doing well but is yet to fully-adapt to our world. Personally, I can communicate with her with ease. The first person whom she was able to recognise was her mother and elder brother Alfred. Since the girl is yet to fully recover, we need not to divulge information which may derail the progress we have made,” said Maponde.

When asked for a comment, Chief Negari said it was a great day for people in his area to welcome Rowai back to the world of physical being.

“It is a pleasure for me to be here bearing witness to this amazing event. It has been many years since our daughter was taken by mermaids so we are excited that we now have her back. I have seen her myself and she is indeed human,” said Chief Negari.

Other sources who agreed to talk to TellZim News said when she was still ensconced in Zaka, Rowai would on some instances disappear and reappear later.

“When she was in Zaka she disappeared and reappeared on three separate occasions. Upon her reappearance, she would bring with her concoctions of all sorts. Some reeds that had grown close to her shoulders and were noticed when she came back have since disappeared.

“She had very long hair when she came back but it has now receded to the size of the normal hair of any other ordinary person that you know. It is Rowai’s own instruction that no photograph must be taken at the moment,” said a source.

Other people who are well-versed with the family’s travails throughout the 1980s, 90s and early 2000s said they grew up accustomed to the intermittent sound of traditional drums in the bush especially during the night as the Chihwakwas desperately tried to bring back their ‘lost’ child.

“As I grew up, I would ask my parents why there were sounds of drumbeats in the bush far away from home and they would tell me that the Chihwakwa family was performing traditional rituals to try and bring back their lost child. It became a normal thing up until I left my rural home for work in town in the early 2000s,” said one woman.

The Chihwakwa family says Rowai disappeared along a small stream known as Matande which offloads its flow down into the mighty Runde River.