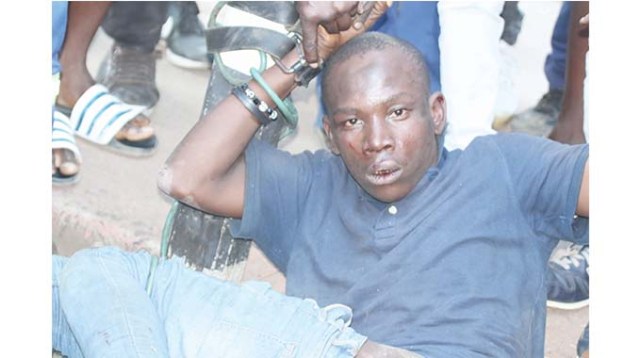 A BRAVE Bulawayo woman is admitted to a local hospital after she was stabbed on the hip and instead of capitulating, she clung onto the bonnet of a getaway car of suspected criminals who had robbed her and was dragged for more than 60 metres in the city centre on Friday afternoon.

In a typical movie style, the woman Ms Lasta Nkala (39) could not stomach letting the suspected robbers who had snatched her laptop, cellphone and jacket let go and instead jumped onto the bonnet with blood dripping from her hip and tightened her grip on the wipers of the windscreen of the car before the suspects sped off. The incident occurred at around 4pm outside a fast food outlet near Pick n Pay TM Hyper and a Sunday News reporter witnessed the incident.

Realising that the woman was adamant, the speeding driver of the gateway car, a white Honda Fit, only stopped after about 60 metres when he was blocked by another motorist and together with his peers disembarked and started running away with members of the public in hot pursuit.

When the driver of the car jumped out of his vehicle he was brandishing an okapi knife, but that did not deter members of the public who still chased after him. When he made the move towards a nearby meat wholesale outlet, a shopper who was waiting to get in to be served kicked him with a safety shoe. The suspected robber stumbled and tried to change course, running towards Joshua Mqabuko Nkomo Street.

The mob then swarmed on him and the okapi knife slipped from his hands as he was getting kicks from the crowd. He then fell to the ground and the mob used every weapon at its disposal to beat him up. However, when the mob thought he had succumbed to its beatings and turned its attention to Ms Nkala who was still under the car after falling off, the alleged robber jumped into the car and sped off.

However, Ms Nkala’s efforts and that of the mob were not in vain either as one of the suspected thieves was caught, tied to a road sign post and members of the public meted out instant justice. Some men even removed their belts and gave him a thorough beating. He was only rescued after the police arrived at the scene.

However, Bulawayo police spokesman Inspector Abednico Ncube yesterday said he was still to get the report of the incident.

Sunday News visited Ms Nkala at the hospital and although the news crew could not talk to her, her husband Mr Justice Mahwiti said his wife lost property worth more than US$1 000 to the suspected thieves. He said his wife sustained bruises on the shoulder, face and ribs. He said the incident happened when she was about to drive off after buying a take away at the food outlet opposite Pick n Pay TM Hyper.

He said one of the thieves distracted her by opening the driver’s door while his colleagues opened the passenger’s side and took the loot. Mr Mahwiti said the robbers had blocked her exit with their vehicle and after grabbing the items they fled to their car and she followed but one of them stabbed her on the left hip to dissuade her from following them.

“She screamed at the same time jumped onto the bonnet and they sped off hoping to shake her off but she only fell when the wipers she was holding onto broke. The car then stopped and did not run over her, at which point the thieves jumped out of the car and ran away,” he said.

Mr Mahwiti said Nkala’s handbag which contained personal belongings was recovered at the scene but they are yet to locate the other goods.

He said the suspected robbers were six in the car and only one was apprehended by members of the public. A witness, said people were surprised when they saw a woman screaming while clinging onto the bonnet of a Honda Fit.

“Alerted by her screams, another car blocked the Honda Fit, forcing the driver to stop and that is when the occupants jumped out with all escaping on foot but one emerged with an okapi knife. After a while people focused on helping the lady as the left front wheel was nearly going over her, allowing the one holding the knife to get back into the car and escape with the vehicle but the other one was caught and severely beaten up.”