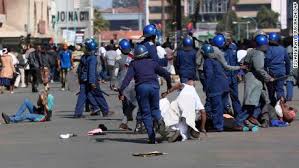 THE government has warned the Nelson Chamisa-led MDC against taking to the streets in their fight against reinstated party leader Thokozani Khupe over the control of the country’s biggest opposition outfit.

This comes after a number of opposition leaders have threatened to take President Emmerson Mnangagwa head-on, accusing him of trying to destroy their party by executing a coup against the legitimately elected leadership of the MDC Alliance under the guise of implementing the judgment of the Supreme Court which allegedly seeks to foist Zanu-PF proxies as leaders of the opposition.

Justice minister Ziyambi Ziyambi told the Daily News that the authorities are ready to thwart any form of protest.

“Whatever they are saying we are going to deal with them decisively. We are more prepared than before. We are ready to deal with them. MDC must know that no one is responsible for their misunderstanding. Let them try, we are now very vigilant.

“If they think that they are above the law, they will learn the right things the hard way. They will be arrested if they want to disobey the country’s laws,” Ziyambi said.

Addressing the media in Harare recently, MDC Alliance deputy chairperson Job Sikhala said they were going to take Mnangagwa head-on for “destabilising and treating the opposition like terrorists”.

“We are going to deal with him (Mnangagwa) and this is not an empty threat. Do I look like somebody who is joking?
“I know what will happen when we decide to cause pandemonium in the country. You have been clamouring for this and we are now going to give it to you in abundance,” Sikhala warned.

Last week, the Khupe group successfully recalled Chalton Hwende (Kuwadzana East), Tabitha Khumalo (MDC proportional representative), Prosper Mutseyami (Dangamvura) and Midlands senator Lillian Timveos, from Parliament, as it flexed its muscles and demonstrated that it is fully in charge of the beleaguered party for now.
In responding to the development, MDC vice president Tendai Biti said it’s a declaration of war.

“What has happened today is a declaration of war. It marks the end of normal politics in Zimbabwe.”
The Supreme Court recently upheld last year’s ruling by the High Court, which said Chamisa’s ascendancy to the leadership of the MDC had violated the opposition party’s constitution and was, therefore, null and void.

In a judgment handed down by Supreme Court judges Paddington Garwe, Bharat Patel and Antoinette Guvava, Chamisa’s elevation to the MDC’s presidency was thus declared unconstitutional.

The ruling also automatically re-instated former MDC secretary-general Douglas Mwonzora and ex-chairperson Morgen Komichi – who both lost their positions at the party’s chaotic congress in Gweru last year – to their previous positions.

And in addition to installing Khupe as interim party president, it also ordered her to convene an extraordinary MDC congress to elect a new leadership within three months.