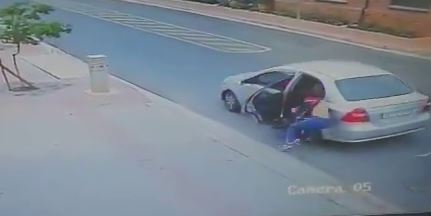 With the alarming surge in cases of human trafficking in SouthAfrica, a harrowing video of a botched kidnapping attempt that recently surfaced, exposed how some of the criminals execute the abductions. In a video that has since gone viral on social media, an unidentified woman was lucky to escape an abduction attempt in Auckland Park, Johannesburg after the assailants failed to drag her into their getaway car.

In what seems to be a well-plotted plan of action, the suspected criminals who are in driving a silver Mercedes Benz unexpectedly pounce on an unidentified woman whom they try to pull into the vehicle. According to the CCTV video footage, the woman wrestles with one of the assailants who tries to pull her into the car before it takes off in highspeed, leaving her tumbling on the ground. The woman who seems shell-shocked by the incident picks herself up before being attended by security guards who rush to the scene.