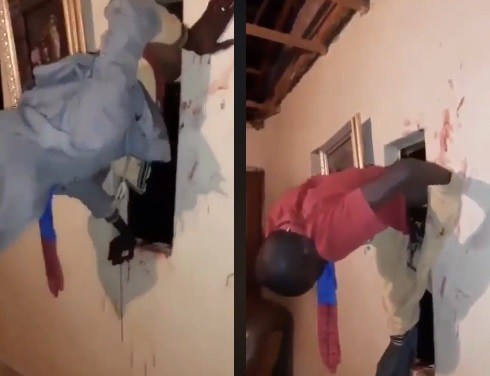 A foiled house breaking attempt lands a burglar in trouble as he ended waking up victims calling for help. The foiled housebreaking incident happened in Klerksdorp, North West Province and captured in a video.

In a recorded video, the suspect wearing a blue sweater was seen dangling his head while his abdomen remained stuck on the window. Groaning in agony, he injured himself while trying to free himself from the window, leaving bloodstains on the wall.

In the video, the stuck burglar is heard calling a woman who was filming him, asking for a chance to explain. “Let me explain,” he pleads while attempting to take off his jersey.

SAPS police Provincial police spokesperson Col Adele Myburgh confirmed the incident, which was captured on video, and revealed that it happened in the early hours of Saturday.

“The 39-year-old is in court and a case of housebreaking is under investigation.”