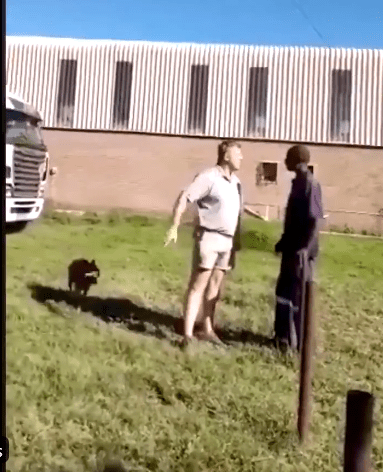 A ZIMBABWEAN truck driver refuses to be pushed around by his white boss in a video that has gone viral.

A clearly angry white man shouts at the man who remains composed daring his boss to do anything beyond shouting.

The man refuses to be cowed into submission and remains steadfast in a show of boldness.

“Do what you want”, the man keeps repeating at the angry boss.

Despite Uncle Toms we hv here, an average Zimbabwean is NOT intimidated by skin color. No matter the rant.

A South African wld be wetting his pants.

We hv Mugabe to thank for this one.

The late Robert Mugabe was known to be bold in the face of racial discrimination hence this attribute.

Many black men always feel intimidated by their white bosses such that they won’t call out oppression.

This is true with many recorded incidences of Chinese nationals oppressing black folk at their workplaces.

This is what RBZ auction forex auction trading system means