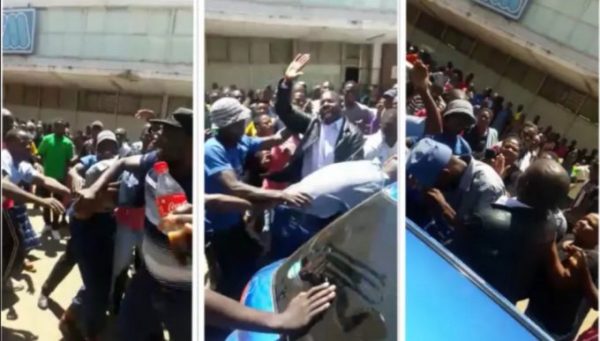 A Zimbabwe Republic Police (ZRP) officer was allegedly caught stealing, and the public meted out instant justice to him.

The undentified police officer who is in full uniform is seen at the receiving end of fists, open kicks and slaps from an angry mob which is dispensing ‘instant justice’ on the person who should be maintaining law and order.

In the undated video which is going wildly viral on social media, the police officer seems to have been apprehended by citizens who apparently caught him in the act stealing near a TM Supermarket.

It is not yet clear, where the incident took place.

The person narrating the video can be heard saying,

The crowd, on the other hand, is screaming “Mbavha. Mbavha [Thief. Thief]” and baying for the policeman’s blood.

The people who have apprehended the police officer are trying to transport him via a Blue vehicle. However, before the rogue officer of the law can get into the vehicle, the crowd manages to surround him and starts assaulting him mercilessly.

The incident of the thieving policeman comes only a few days after another worker vent viral on social media after he was caught redhanded stealing.

A teacher at private school, who was initially erroneously referred to as a headmaster from Mutoko, was caught redhanded after stealing fresh green mealies.

The picture of the defeated and forlorn-looking man went viral on social media and elicited sympathy from many ordinary Zimbabweans who commiserated with man’s plight.

While people did not condone the man’s actions, they bemoaned the fact that a man who had seemingly done everything right in his life has been reduced to such a desperate state.