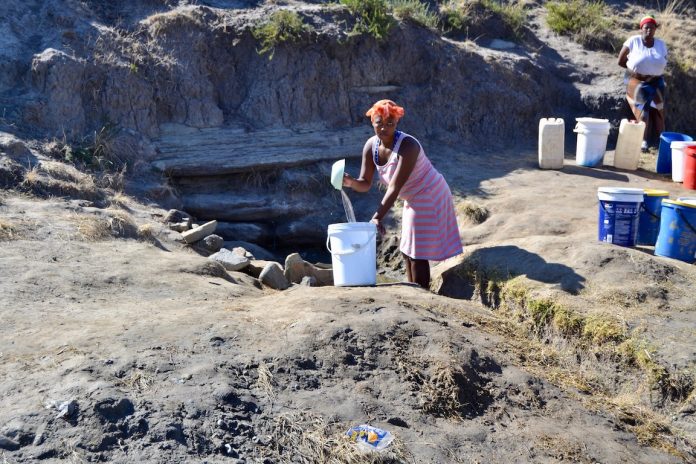 Villagers from four villages in Ward 10, Bulilima District in Matabeleland South are reportedly crossing the border to neighbouring Botswana illegally to fetch water from the Maitengwe River.

The villagers used to draw water from Fubawulu Dam but its wall collapsed in 2019 leaving them with no option but to “steal” water from Botswana.

The four villages – Fubawulu, Nsubula, Bambadzi, and Tshilukutu – have no boreholes, and according to a local official, the water table is too deep.

River Maitengwe is, however, dry so villagers dig water holes on the riverbed and have to wake up as early as 4 AM, in the process exposing themselves to rapists.

One of the affected villagers, Handukani Sibanda from Tshilukutu Village who was in the company of Thembelenkosini Ndlovu, said:

“We know that we are illegally doing this but the good thing is that border security knows our water plight, as long as one is fetching water there is no problem.

Our only challenge is the distance we walk to the river, it’s about 5km from where I stay.”

Their livestock drink from the same river but on the Zimbabwean side which, however, is further than 5km hence their decision to cross the border.

“They say water is life and since we have no access to water it means we have no life. It’s due to the benevolence of Botswana authorities who took a decision not to chase us otherwise this could be a real disaster for us, a whole village with no single borehole, it is tragic.”

Chengetai Nyathi, from Nsubula village, said whenever she thinks of water, she gets depressed. Said Nyathi:

“Life for us is unbearable, to be honest. Can you imagine walking for more than 5km to go and fetch water, worse in a foreign country where your trip can turnout for the worst.

While we have generally enjoyed peace from border security, once in a while you can be harassed, especially if there has been a change of shifts.

Just recently there was a case of rape because we wake up sometimes around 4 AM when it’s still dark.”

Ward 10 councillor, who is also the Bulilima Rural District Council chairperson, said previous attempts to drill a borehole at Fubawulu failed because the rigs were only 70m long while the water table was 100m deep. He said:

As council, we received funds from the Community Development Fund as well as the devolution fund but pressing priority issues made it difficult to use the funding to drill boreholes.

We used CDF to build a clinic for the Ward because there was no clinic in the ward, Mpimba Clinic which is only waiting to be opened.

As for the devolution funds, the money was used to construct sewer ponds for the Hlalani Kuhle houses in Figtree because of fear of disease breakouts.”

Meanwhile, villagers and diasporans from the Ward, which has a total of seven villages, have since mobilised themselves and managed to raise 150 000 rand.

The money was used to hire a grader from Bulawayo, 250 km away, and meet labour costs for the reconstruction of the Fubawulu Dam wall that collapsed in 2019.

Each of the 1 350 homesteads in the ward, was required to contribute 100 rands while diasporans forked out 450 rands each.

A further 50 000 rand is needed to reconstruct the spillway which was condemned by council engineers.