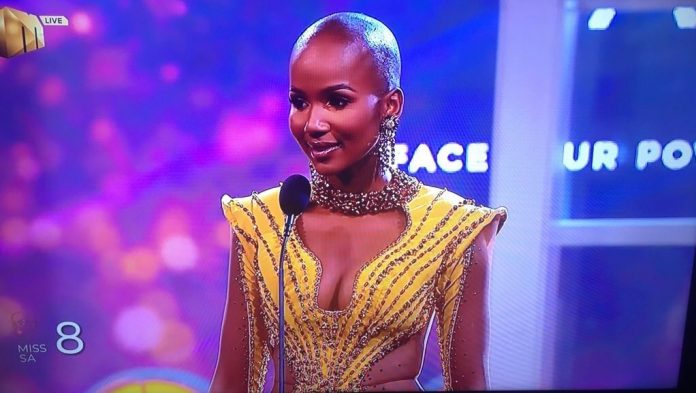 MISS SA 2020 will on Friday visit various children’s homes and care centers in the Vhembe district of her home province, Limpopo.

Shudufhadzo Musinda on Thursday participated in a street parade in Polokwane and later moved to Seshego as part of her three-day homecoming program in Limpopo.

On Thursday, she participated in a street parade in Polokwane and later moved to Seshego as part of her three-day homecoming program in the province.

Thousands of residents stood on the streets of Polokwane to see the parade.

Musida said she has always worked hard to achieve her goals.

“It is such a huge responsibility to be a role model to so many girl children around the country; not just in Limpopo, especially in rural areas. To know that ndi va ha-Vhangani, ndo dzena ha-Vhangani and by some grace, not even by some grace; by God’s grace and through hard work and determination, I managed to make it and stand here in front of you, in front of a premier and a MEC. I was speaking to my grandfather last night and he said, no ita muthu, and for him to say that, it is any girl’s dream to hear that from her grandfather. When he mentioned my accolades earlier, I was just thinking about how it was never easy, but I knew it had to be done. It’s not just about the beauty, but it’s about the brains. In order to change and empower so many people, I believe that once you empower a young girl, you empower many nations.”

She said she will use her time as Miss SA to raise awareness about mental health.

“As I stand here and I see the Premier here, thank you for your presence and I see the executive mayors and various counsellors. I see it as a commitment to my course for change, my course of mental health. It is something that, especially in rural communities, it is a taboo conversation. We often engage in it, but not to rehabilitate in our society, but rather to shame and I believe that now it is time for that to change and it starts with us as representatives of people in the public platform to bring about change.”

“To all the girls is that it is possible, it can be done. To Shudu, we want to say this crown on your head should not alter your thinking and determine your character. You have been born a star and working hard. Please remember that you are now the mirror through which the rural girl looks at herself, please continue being a good ambassador. As the province of Limpopo as government, we pledge our commitment to systematically support Shudufhadzo in her future endeavors.”

Musida is expected to visit Vuwani, where she was born and raised.

Is Mzansi ready for an AKA presidency? #AKA4President