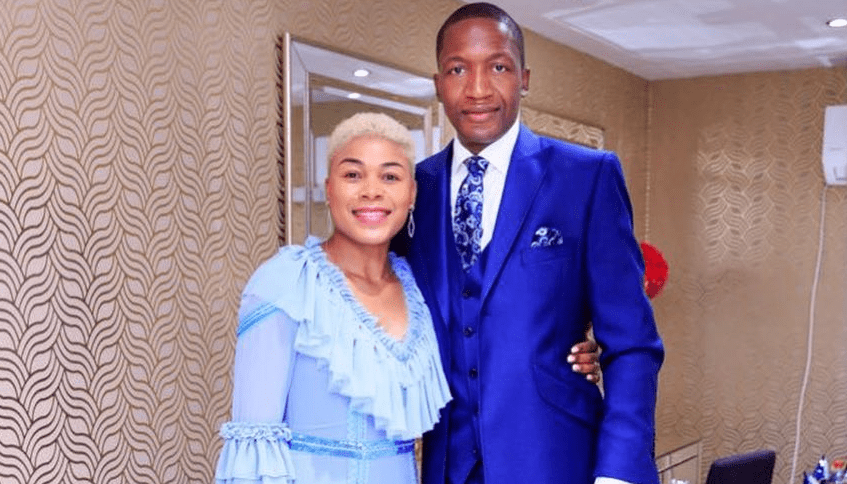 Uebert Angel’s wife Beverly launches a 24-Hour satellite news channel. According to a promo video seen by Nehanda Radio, Apex World News launched in June and already has reporters and news presenters around the world. The channel says it will use experienced broadcasters, some who have worked for news channels like the BBC and Sky News.

Beverly Angel, the wife of businessman, serial investor and Prophet, Uebert Angel, has launched a new satellite TV channel dedicated to international news. The couple already has two channels in Miracle TV and GoodNews TV dedicated to their ministry and the new but more taxing, Apex World News, joins the family.

“We will be broadcasting on EutelSat7WA, Amos-17, IntelSat20 Satellite, Brio TV and also Roku,” a scrolling alert on the video announced. The channel is broadcasting via satellite, internet and cable, delivering news 24 hours a day, 7 days a week. A source told us “the channel is already a hit with Conservatives since it took over ‘10 Downing Street brief’ a political analysis group that focused on policies coming out of number ten.”

Paul Toole a broadcaster with over 12 years experience is featured in one of the station’s promos;

“The world has changed and so has the way we view and consume news. Every interest is at war these days and it can be hard to decipher truth from fiction in this days replete with fake news. The world we leave in grossly inundated with biased reporting,” Tom says in the video.

Last year in May, GoodNews TV, owned by Prophet Angel made history as it went LIVE for the first time broadcasting on Sky Channel 596. The Spirit Embassy: GoodNews Church founder became the first Zimbabwean to own and run a gospel TV station on the much coveted Sky platform in the UK.

Industry experts told Nehanda Radio that just one TV channel would cost a minimum of £48 000 a month per channel to broadcast on the Sky platform and when you factor in salaries for staff and uplink at least £80 000 a month is needed and that’s for religious channels.

Secular Channels go much higher than that on Sky meaning this new venture, Apex World News will likely cost almost double. The TV station gives the church access to the whole of Europe. His followers in Africa, Asia and the Middle East will still continue to be served by his Miracle TV station.