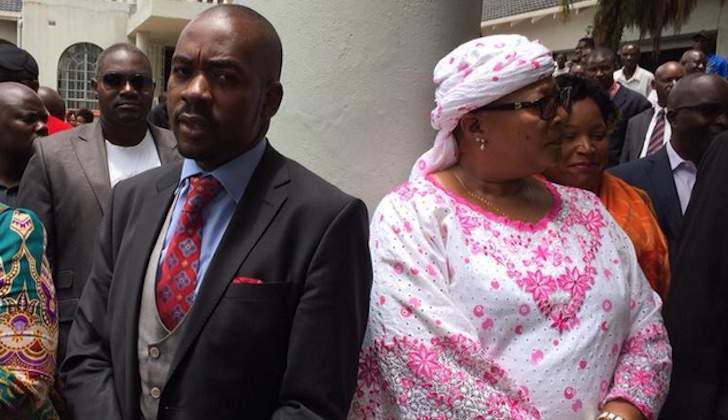 MDC-T interim leader Dr Thokozani Khupe has sacked Mr Nelson Chamisa from the opposition party for defying a court ruling that nullified his leadership of the party and ordered that the organisation reverts to its 2014 structures.

In a letter addressed to Mr Chamisa in his capacity as the party’s secretary for policy and research as per the 2014 structures, the Dr Khupe led MDC-T’s secretary general Mr Douglas Mwonzora cited Mr Chamisa’s recent appointments and redeployments of the national standing committee as the reason behind his sacking.

“I note that following the Supreme Court judgement, in MDC and Others v Elias Mashavira and Others (SC56/2020) of 31 March 2020, which ruled that you were no longer the President of the Movement for Democratic Change which was formerly led by the late Dr Morgan Tsvangirai you have continued to defy the court order,” said Mr Mwonzora.

“The latest incident is when on 21 May 2020 you issued a communication to the effect that you had in your capacity as the President of the MDC Alliance Party made certain appointments and redeployments to the Party’s National Standing Committee. You could only have made these appointments as president of the party other than the Party that was referred to in the Supreme Court judgement in the case mentioned above.”

Mr Mwonzora said in terms of clause 5.10.(a) of the MDC-T constitution Mr Chamisa had automatically terminated his membership to the party by joining or forming another party.

Efforts to get a comment from Mr Chamisa’s spokesperson Dr Nkululeko Sibanda were fruitless.

However, commenting on the letter on Twitter yesterday afternoon, Dr Sibanda said: “It’s the People Stupid, if I may borrow from President Clinton. Trying so hard. People, people, people, the people of Zimbabwe wrote a letter to President Chamisa, and he is focused on that letter and not this Zanu-PF sponsored outfit.”

Zanu-PF has, however, denied any involvement in the internal affairs of opposition parties saying they are busy working towards achieving Vision 2030.

High Court judge Justice Tawanda Chitapi last week ruled that the MDC-Alliance does not legally exist as a legal person who can sue in court, and in the dispute of the MDC-T recall of legislators, it does not have the standing to sue, suggesting that the recalled legislators could bring legal actions as individuals.

In April, the Supreme Court ruled that Mr Chamisa is not the legitimate MDC leader in terms of the party’s constitution and subsequently ordered the convening of an extra-ordinary congress within three months to elect a new president.

Justice Mushore also nullified the appointments of Mr Chamisa and Elias Mudzuri as deputy presidents of the MDC, saying they were unconstitutional.

The dismissal of the appeal automatically reinstated Dr Khupe as the legitimate leader of the MDC, forcing the party to go back and start from February 15, 2018.