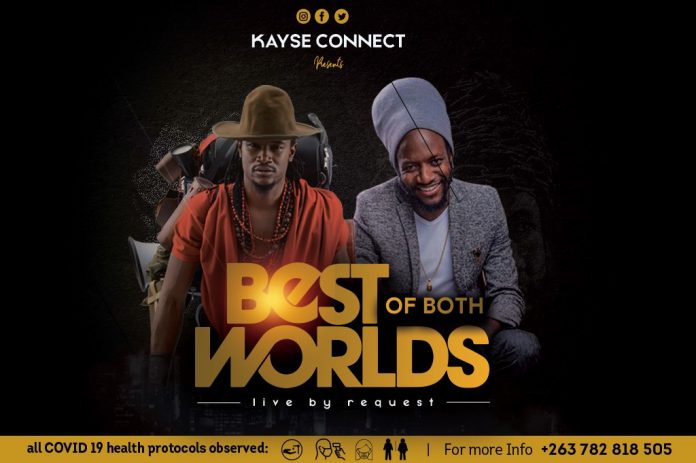 The Zimbabwe’s top musicians, Jah Prayzah and Winky D, are set to perform together in the ‘Best of Both Worlds’ show at the Harare International Conference Centre (HICC) tonight.

With Covid-19 lockdown measures in place, only 100 fans will be allowed into the venue with the vast majority of fans expected to link up exclusively on the Gateway Stream Music virtual live streaming Pay Per View (PPV) platform.

Gateway Stream Music in partnership with Kayse Connect bring us this show, days after hosting a similar ground-breaking PPV show headlined by Janet Manyowa at HICC.

Setting up of the stage commenced on Wednesday and Kayse Connect events manager and company spokesman Elton Kurima said all was in place.

“We start set up today (yesterday), so far we are on schedule, and I can say we are expecting a good event. We pay a booking fee for Jah and Winky and they come perform on the day. I would like to say we have a good relationship with the two,” he added.

The Gateway Stream Music App is the first Pay Per View (PPV) platform in Zimbabwe aimed at musicians and other artists alike to enable them to monetize their music enterprise.

PPV is a type of pay television or webcast service by which a viewer can purchase events to view via private telecast. It enables fans to buy tickets and attend shows online from the comfort of their home or any location with access to internet connectivity through live streaming. PPV is a priced at a fraction of the cost of the normal physical shows.

“Pay Per View is a fairly new concept in Zimbabwe which arrived on our doorsteps due to the Covid-19 lock-down restrictions. It enables the artists to get back to work as currently they cannot host live shows where fans physically attend” said Ishe Makambira Gateway Stream Music Project Manager.

He said the concept of the Gateway Stream Music web and mobile application is premised on the need to empower artists.

“Our App gives artists the opportunity to earn an income from live streaming their shows using the Pay Per View platform which is within the App. Unlike other free live streaming where they do not earn any money from the live performance. For YouTube one has to reach 1 million views to earn a pay check! Gateway Stream Music ensures artists get paid for any airplay and receive their money immediately.

“This particular show features two high profile artists that have raised the Zimbabwean flag high and continue to be the most sought after artists in Zimbabwe. To make the concert more interesting almost everyone can now watch and also request a song from the two artists.”

Kayse Connect has partnered with Gateway Stream Music to give the fans a chance to watch Jah Prayzah and Winky D for only US$2 or equivalent in Zimbabwe dollars. Fans can stream the concert from any part of the world. A few fans will get a chance to call in to request a song from any of these two giants” said Kurima. The concert will run for two hours from 6pm – 8pm.

Social media platforms especially Facebook and Instagram have been ablaze since the announcement of the concert, with fans already debating over who will outshine the other.

“We hope to make the event a memorable one through highlights that will last for decades and decades” he said.

The country’s top gospel songstress Janet Manyowa was the first to host a live streaming Pay Per View show on Gateway Stream Music on Sunday 13 December 2020, when she launched the “Sounds of Victory” Extended Play (EP) at the HICC.

The event which was available exclusively via live stream on the Gateway Stream Music App was a resounding success. Fans enjoyed a seamless and stable output with high resolution video and sound quality.

To purchase tickets fans can log on to the Gateway Stream Music website or download the App which is available on Google Play Store for Android devices and the Apple App Store for IOS devices for the Jah Prayzah and Winky D shows.

Makambira said the Gateway Stream Music Application is there for both artistes and fans and has opportunities for the two stakeholders to socialize.

“The Gateway Stream Music Web and Mobile Application is a music platform that is built for both musicians and users. Musicians are able to upload their music, live stream their shows using the Pay Per View platform in the Gateway Stream Music App, set pricing, manage inventory, socialize with their fans and receive revenue for all purchases through a revolutionary wallet function located in the App.

“The Gateway Stream Music App will give artistes access to consumers and ensure that they can earn revenue for their trade, reducing the risk of losing earnings through piracy,” he said.

“Smiles and hugs” As Drake joins Black Coffee On Stage