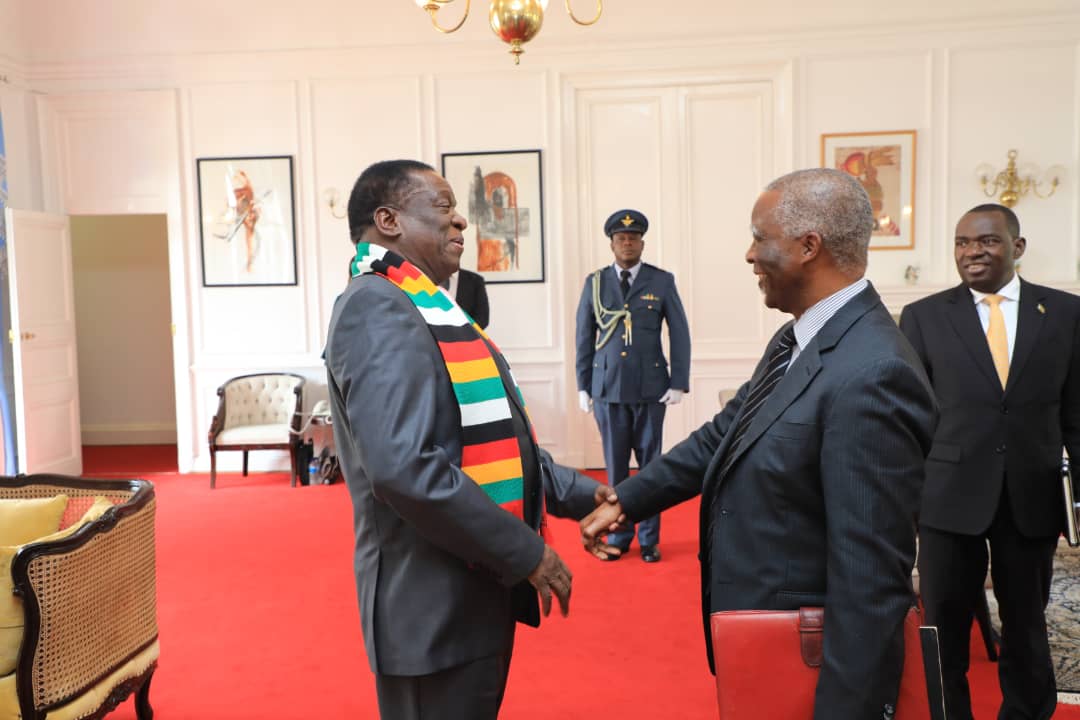 Thabo Mbeki’s return lifts Zimbabweans hopes. This comes at a time when talks between President Emmerson Mnangagwa’s government and the opposition Movement for Democratic Change have broken down, pitching Zimbabwe further into political disarray. MDC leader Nelson Chamisa has refused to engage President Emmerson Mnangagwa under the POLAD grouping where other actors command near zero political support.

The imminent return to Harare of former South African president Thabo Mbeki, to continue with his mediation efforts in the local impasse has lifted the hopes of many Zimbabweans who see dialogue as the only way to save the country from total collapse.

Opposition leader Nelson Chamisa has said that the negotiations have been unable to bridge “gaps between us” and they will be resorting to mass action against Mnangagwa. He said he had tried to broker talks between Mnangagwa and himself over a political and economic crisis he said had left the country “angry and traumatised”

“They are refusing to have this dialogue,” Chamisa said. “I have been patient with him for too long and I am considerate. I can easily mobilize a committee and call for an emergency dialogue, the Constitution allows for that.”

Chamisa’s longstanding reluctance to drop Mnangagwa’s legitimacy issue as a pre-condition for opening talks has angered the hard-line faction of the ruling party.

The collapse of negotiations ensures that Zimbabwe’s economic crisis drags on – a crisis that has fomented an ailing economy battling a severe dollar shortage that has sapped supplies of food, fuel and medicines. Chamisa plans to put his original deal to the ruling party, including initiating fresh electoral, legal and rights reforms which could also be held on a set of alternative options. Zanu-PF has already rejected the deal several times and the chances of it passing look as slim as ever.

On Wednesday, Chamisa told a news conference at his party headquarters that his party will now engage in a radical approach and hold demonstrations in a bid to push Mnangagwa to the negotiation table and the implementation of reforms ahead of the 2023 elections.

The MDC has adopted an alternative Electoral Bill whose principles are anchored on Southern Africa Development Community (Sadc) and the African Union (AU) and United Nations (UN) guidelines on the conduct of free and fair elections. The electoral principles include provision for the Diaspora vote as well as a truly impartial elections management body, among other key tenets. If talks hit a snag, Chamisa wants the elections run by the UN and AU.

Chamisa has said “2020 is the year of action”, given the deteriorating social and economic conditions in the country.

“Only a legitimate people’s government will be able to solve the dire challenges affecting the people,” he said. Mnangagwa has said he can only hold talks with Chamisa under the Political Actors Dialogue (Polad) – a grouping of losing presidential candidates in the 2018 elections, as well as churches and civic organisations. Chamisa has said he will not join “this Polad charade.”

However, the political rivals had initially agreed to seek renewed mediation from former South African President Thabo Mbeki to try to end the stand-off in Zimbabwe.
Mnangagwa and Chamisa met for about an hour in December with Mbeki, who brokered a similar deal in 2008 just days before he was forced to give up South Africa’s presidency by his ruling African National Congress.

But Mnangagwa now says there was no immediate need for further mediation by Mbeki, who has agreed to continue his mediation on behalf of his Thabo Mbeki Foundation.
Mnangagwa is now said to be ignoring Mbeki’s phone calls since his last visit in December.
George Charamba, who is Mnangagwa’s spokesperson, has said Mnangagwa met with Mbeki on the sidelines of the 33rd Ordinary Summit of the African Union Summit held in Addis Ababa, Ethiopia.

“Really, if people are meeting face to face, is there need for them to meet telephonically. The MDC is agenda-setting because Zanu-PF and other political parties are talking in Polad,” he said, denying that Mbeki was the annointed mediator.

“There is a national dialogue involving retired judge, Justice Sello Nare and Margaret Sangarwe, the conveners of Polad. The process is full proof. “If Chamisa doesn’t want to engage in Polad nationally and is waiting for talks, he is ‘Waiting for Godot’ meaning he is waiting for something that will never arrive,” he said.

Earlier, the EU indicated that it also did not recognise the Polad that was established by Mnangagwa last year as a forum for resolving the political crisis. Chamisa has refused to participate in the forum, which he and other opposition leaders have described as a waste of time.

Chamisa has said he wants the Sadc and AU as discussion forums, an idea endorsed by the EU. The EU said it did not recognise Polad a well as an adequate mechanism to resolve Zimbabwe’s problems and that it too would engage Sadc and the AU to pressure Mnangagwa to embrace a more inclusive process.

Also in the mix was a potential intervention by Mbeki. The idea has been welcomed by Chamisa and the MDC but received a frostier reception from the government which still appears undecided on the idea.
The South African High Commission in Harare confirmed that Mbeki had finished studying and analysing the various proposals from the country’s political protagonists and was ready to commence his role as a mediator.

The Thabo Mbeki Foundation is engaged in a dialogue between Mnangagwa and Chamisa with the support of the South African government and President Cyril Ramaphosa.

The European Union, eased its sanctions on Zimbabwe on Monday, while reiterating its call for the total removal of the measures imposed in the early 2000s. The EU has suspended sanctions against Vice President Constantino Chiwenga, among others, but for now maintains an arms embargo against the country and its state-owned defence industry.

The easing of the measures particularly on individuals is an encouraging development and perhaps the first sign that the EU may be prepared to move forward in concert with opposition parties and civil society in Zimbabwe.

But the EU reiterated that the failure by the administration of Mnangagwa to implement reforms is the cause of the country’s deepening economic crisis, and has indicated that it did not recognise the Polad that was established by Mnangagwa last year as a forum for resolving the political crisis.

Chamisa has flatly refused to participate in the Polad forum, which he and other opposition leaders have described as a waste of time. Chamisa has insisted he wants the Sadc and the AU as discussion forums, an idea endorsed by the EU.

The EU said it did not recognise Polad as an adequate mechanism to resolve Zimbabwe’s problems and that it too would engage Sadc and the AU to pressure Mr Mnangagwa to embrace a more inclusive process.

The EU has suspended sanctions against Chiwenga, among others, but for now maintains an arms embargo against the country and its state-owned defence industry. Other officials removed from the sanctions list include Shiri, Sibanda, and Grace Mugabe.

Moyo told news agencies that while the easing was welcomed, sanctions belonged to the past and should be totally scrapped.

NKC African Economics analyst Gary Van Staden said the easing of the measures particularly on individuals is an encouraging development and perhaps the first sign that the EU may be prepared to move forward in concert with opposition parties and civil society in Zimbabwe.

But the EU reiterated that the failure by the Mnangagwa administration to implement reforms is the cause of the country’s deepening economic crisis.

Stephen Chan, a professor of world politics at the University of London said for many years now, the EU has had the option on its table to ease sanctions.

“This has long been a serious option put forward from within the European Commission to heads of government. This has been on the grounds that they no longer have any effect except the symbolic value of disapproval of the lack of fair government and transparent human rights,” Chan told the Daily News on Sunday.

“But this was always counter-posed against the lack of value in the decline of the Zimbabwean economy. Contrary to Zanu-PF rhetoric, the sanctions never caused Zimbabwean economic decline. Above all, the collapse of export-led productivity did that.

“Having said that, expect no significant investment from Europe itself. The EU will have difficulties of its own with the UK’s departure.

As for the UK, the trade talks in London recently with 21 African leaders mentioned Zimbabwe not at all. US Secretary of State Pompeo’s visit to Africa again did not discuss Zimbabwe with any African leader. So the easing of EU sanctions will in fact do nothing in immediate real terms for Zimbabwe.”