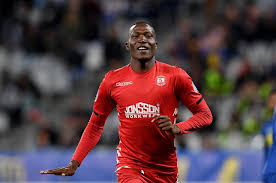 With previous media reports suggesting South African Premiership football side Highlands Park was set to impose salary cuts on the staff and playing personnel, the club has confirmed trimming Zimbabwean striker Tendai Ndoro’s pay for May by R20 000.

According to the Lions of the North’s co-director, Sinky Mnisi, the Tembisa-based club had to cut salaries because their sponsors stopped paying them owing to the coronavirus pandemic.

The coronavirus outbreak has forced the South African Premier Soccer League to suspend the 2019/20 domestic season indefinitely and a number of clubs are experiencing financial difficulties as a result.

“It is true I can confirm that he has been paid R20 000 short I can agree with you,” Mnisi told SAfm as quoted by Phakaaathi.

“The reason being we had to balance our books. In terms of what we pay. Remember both our sponsors are not giving us any money at the moment, we did it purely because there is no money.

“And no one is working we had to pay them from the grant. There are one or two who were short paid it’s not just him.”

On the other hand, the former Orlando Pirates hitman was quoted as saying he wasn’t sure if he had taken a pay cut or not, but hoped the money could be used to save lives if he did.

“I didn’t see I was underpaid. But if that’s the case it’s fine. I hope they use the money wisely for Covid-19,” continued Ndoro.

Ndoro is at the same club with veteran Zimbabwean goalkeeper Tapuwa Kapini who recently revealed that he enjoys fixing cars when he is not playing football.

Kapini co-owns a gearbox workshop in Kempton Park just outside Johannesburg where he fixes cars with some of his employees.

The former Warriors goalkeeper says he attends training, then goes to the workshop to fix cars after fulfilling his duties at the Lions of the North.

Fans were surprised to learn that the goalkeeper is also a mechanic when he shared a picture of himself in the workshop before the national lockdown in South Africa, showing off a skill he learned before turning professional in Zimbabwe.

Kapini says he makes time to fix cars in between travelling to play in different provinces in South Africa.

“I only go to the workshop after training,” wrote Kapini on Twitter.

Kapini also squashed rumours that he is set to retire soon.

The former Zimbabwe international is yet to feature for the Lions of the North in the Absa Premiership this season due to a shoulder injury which he picked up towards the end of the previous term.

Kapini made his return to action against Mamelodi Sundowns in the Nedbank Cup quarterfinal clash two months ago, but the current season has since been suspended indefinitely due to the coronavirus pandemic.

Rumours indicating that Kapini is considering retiring from professional football recently emerged, but 35-year-old Kapini has refuted the reports.

“There is no way that I am considering retirement. I still have a lot to offer,” Kapini recently told supersport.com.

“I will see as time goes by, but at the moment I am not thinking of retiring.

The Harare-born player has been plying his trade in South Africa since 2006 — making him one of the longest-serving foreigners in the South African PSL.

Kapini has also played for AmaZulu FC and Platinum Stars in the top-flight and he captained both clubs.

“The best moments in my club career came when I was with AmaZulu (during the 2011/12 season) as we finished seventh in the Absa Premiership,” he said.

“I had a great season and I also played well in cup matches [reaching the Nedbank Cup semifinals]. It was an amazing time in my career. I will never forget that season.”

The experienced shot-stopper has played an instrumental role in helping Highlands Park secure promotion to the PSL from the GladAfrica Championship twice.

“There is also the time when we got promoted through [the PSL Promotional/Relegation] playoffs with Highlands Park. It was also amazing because we were in the relegation zone in the early stages of the season,” he continued.

“But when coach Allan Freese came in he did his job and went on to win the playoffs, and we did not concede a single goal during those matches.

“I have had many memorable moments. We also got promoted with coach [Owen] Da Gama having conceded only 13 goals in the GladAfrica Championship.”

Despite sitting at the top of the Absa South African Premiership league table, some of the supporters have criticised Middendorp’s style of play at Amakhosi this season.

The Phefeni Glamour Boys could be crowned league champions this season if they win the majority of their eight remaining games.

Muchichwa has since urged the Amakhosi faithful to rally behind their German coach and help clean the spiderwebs from their trophy cabinet.

“The way some fans behave at times, you wonder if they really know what they want,” says Muchichwa in the latest KICK OFF magazine currently on sale.

“The team is top of the standings and on the verge of winning the league, but you are still complaining.

“Fans need to understand that for now, Middendorp just needs to stop the drought and win a trophy. These other smaller issues related to how the team plays will be dealt with once there is a trophy in the cabinet.”