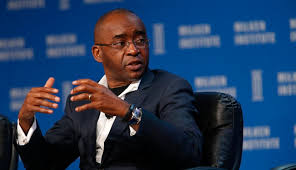 The founder of Econet Wireless, Dr Strive Masiyiwa has announced that he, together with his global partners, has donated 1000 ventilators to a number of African states.

Masiyiwa announced the arrival of 45 full ICU ventilators in Zimbabwe which the businessman ordered a couple of months back.

The billionaire entrepreneur and philanthropist, who is the African Union’s Special Envoy to Coordinate the Africa Private Sector Initiative for the Procurement of Personal Protective Equipment and other Essential Supplies, also announced that he has teamed up with fellow global entrepreneurs Sir Richard Branson and Jeff Skoll to donate 1 000 more ventilators to 8 African countries.

Breaking the news on his popular Facebook blog, Masiyiwa wrote:

Some of you will remember that a few weeks ago, when the pandemic began, I undertook to donate 45 full ICU ventilators to Zimbabwe. I’m pleased to advise that they have now arrived in the country, after being manufactured in the UK. They are being delivered to the country’s leading hospitals.

I’m also pleased to advise that owing to an initiative I have been working on with two well known global entrepreneurs, Sir Richard Branson and Jeff Skoll, 1000 ventilators are being manufactured in SA, under free license.

These will be distributed for FREE to the following countries:

I would like to again express my deepest appreciation to Jeff and Sir Richard.

The FREE open license for the ventilators and Oxygen Concentrators is now available for all African countries. We can produce 10 000 such ventilators if required, and they will be sold at 10%, of the value of a normal ventilator, thanks to the generosity of the philanthropists that provided the technology.

Shipment will begin in July.

Are Caster Semenya And Wife Expecting?