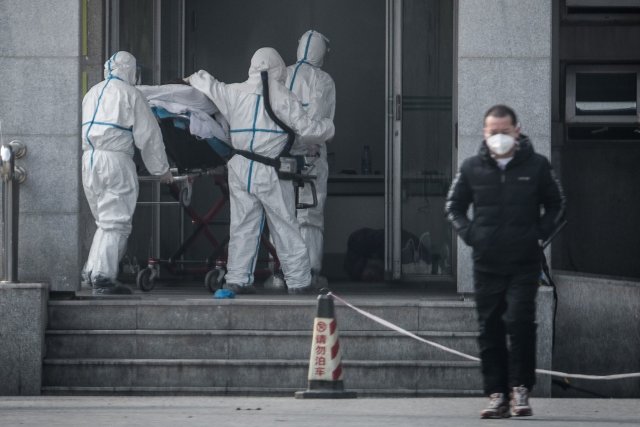 South Korea on Sunday reported 123 new cases of coronavirus and two new deaths, while cases and deaths in China, where the outbreak started, kept on climbing.

The new infections in South Korea brought the total confirmed infections to 556 and the death toll to four, according to the Korea Center for Disease Control and Prevention (KCDC).

In South Korea, Prime Minister Chung Sye Kyun on Friday promised “strong and swift” measures to prevent the virus from spreading further, including designating Daegu and Cheongdo as “special care zones,” according to news agency Yonhap

Daegu’s 2.5 million residents on Thursday were advised to stay at home by Mayor Kwon Young Jin in order to slow the spread of the coronavirus.

Authorities said that cases were also reported in the capital Seoul, the central south-west province of Chungcheong and on Jeju Island.

The Seoul city government said it would ban rallies and close down church services of the Shincheonji Christian sect as part of measures to curb the spread of the Covid-19 illness, Yonhap reported.

Of the new confirmed cases, 75 were linked with the church according to the KCDC.

The South Korean outbreak, mainly involving the cities of Daegu and Cheongdo in North Gyeongsang Province, led the United States to raise its travel advisory for the country, advising citizens travelling to the country to exercise increased caution.

The US State Department issued the same level of alert for citizens travelling to Japan, where the total number of confirmed cases in has grown to 770, including three deaths.

Over 630 of the infected were on the Diamond Princess cruise ship, which was quarantined with its 3,700 passengers and crew in a Japanese port for two weeks as a precaution.

In Japan, Health Minister Katsunobu Kato said late Saturday that his ministry had failed to test 23 Princess Diamond passengers before they disembarked from the ship.

“I deeply regret our mistake. We will do our utmost not to repeat a similar mistake,” the minister told reporters, adding that the passengers had been asked to get tested.

A woman released from the ship was confirmed to have the disease, the first case since a total of 969 passengers disembarked from Wednesday to Friday after testing negative, the government said late on Saturday.

A total of 89 passengers released on Saturday are subject to further monitoring while staying at a government facility near Tokyo.

New research suggests that the coronavirus incubation period may be longer than previously thought, making it more challenging to contain it.

In China nearly all of the new cases and deaths were reported in central Hubei province, where the virus first broke out in the city of Wuhan in late December.

Chinese authorities in Hubei province also said on Saturday that the incubation period for the coronavirus could be as long as 27 days, according to state media.

The Hubei Daily in central China said a 70-year-old man did not exhibit symptoms for nearly a month after visiting his sister on January 25, shortly before she was diagnosed with Covid-19, the disease spread by the virus.

He did not have further contact with her after the visit and first developed symptoms on February 19.

The incubation period for the virus was previously estimated to extend as long as 24 days, according to Chinese researchers, although most quarantine measures to contain the virus around the world only last 14 days.

Tens of millions of people remain on lockdown across China as the government attempts to stop the spread of the virus, with transportation between many provinces limited and offices and schools shuttered.

Government To Use “Anyone” To Invigilate Examinations If Teachers Boycott