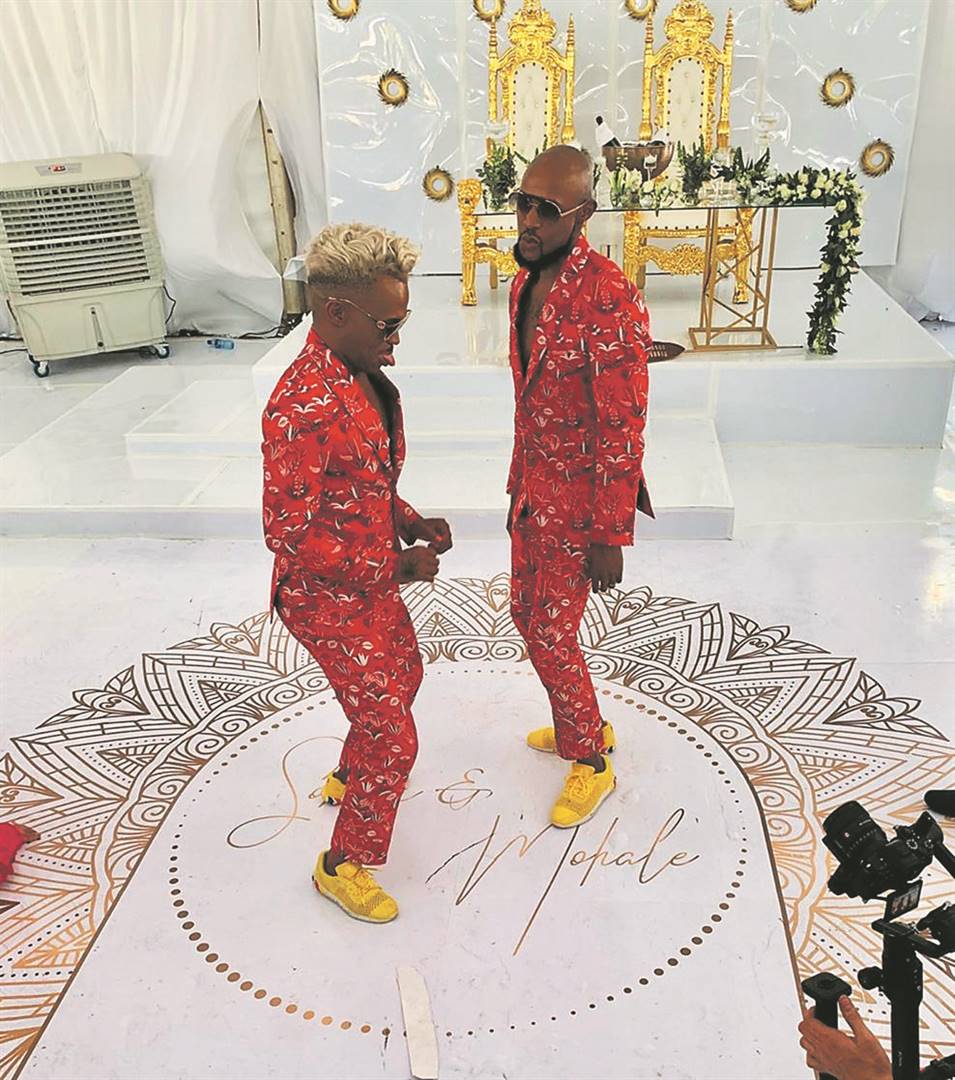 The big day that Mzansi has been anticipating finally came! Yesterday, the glossy white wedding special episode of Somizi and Mohale: The Union, premiered on Showmax and it has been raking in good impressions from its avid viewers.

The opulent gay couple gave Mzansi a front-row seat into their exquisite traditional wedding a few weeks ago – and every Monday, it became a tradition that we have to binge-watch preparations for their white wedding on Showmax.

The wedding special broke the all-time record for the views it garnered on Showmax. From their wedding preparations, glossy bachelor parties, wedding rocks and eye-catching outfits, this week, it all came to an end, but in a classy and flamboyant way, which has made history and captured the hearts of many.

The couple’s wedding was very exclusive, as guests cellphones were confiscated and the media was banned from covering the wedding. This week the final episode aired the extravagant white wedding and there is no more FOMO because, the episode highlighted the couple getting ready to tie the knot, to the arrival of the celebrity guests, to the extravagant moving ceremony and champagne-popping reception.

The star-studded and showstopper wedding became the talk of the town when the lovebirds got hitched but today we got to experience every extravagant moment of their big day.

As the wedding premiered, Somizi and Mohale were preparing for their big day and filled their bathtubs with bubbles and decided to do video calls, to calm each other’s nerves down. They both looked forward to seeing each other’s outfits and meeting at the altar to finally sai ‘I Do’.

Somizi and Somhale’s wedding outfits were such a dream. Their champagne gold embellished with pearls outfits and red bottom shoes had the internet ablaze. The lovebirds looked like a dream and we couldn’t stop swooning.

Designed by Gert Coetzee, the most preferred fashion designer of SA’s biggest stars who was the designer behind the most talked-about looks from their traditional wedding. Somizi’s ensemble had a long cape which complemented and gave his entire outfit a more sophisticated look.

Although Mohale had some hiccups with his outfits, it eventually came together beautifully. The pair had different wardrobe changes and they absolutely put their best fashion foot forward to slay. Their ensembles really stole the show.

2. The Exquisite wedding decor had everyone swooning.

Talk about levels and breath-taking wedding decor. Somizi’s renowned wedding planner Zavion Kotze, in collaboration with Liquid Image Consulting, did the most. The wedding venue looked exquisite that even Somizi and Mohale decided to sneak in before guests arrived to see how it looked and they were sold.

From those imported flowers to the eye-catching reception area, all the components which made the decor a showstopper were just unmatched and fit for the best wedding of a decade.

The chandeliers, cake and white flowers gave the venue a signature look that we all aspired our dream wedding to be like.

3. Somizi and Mohale walking down the aisle were just heartwarming!

The here comes the groom moment had everyone almost reaching for the tissues. Somizi looked like a million bucks in his glamorous outfit. When he walked down the aisle, guests had to command for his attention as ballerinas set the tone high for his grand entrance. The larger-than-life TV star could not stop shedding tears as he was about to say ‘I Do’. Somizi walked down the aisle one man, as his mother was sick.

His mother suffered from a heart attack days before the wedding, but she was asked to be released from the hospital, just to bless the venue and wedding. Mohale walked beautifully down the aisle with his father holding his hand.
He further expressed how grateful he is for his parents.

Goosebumps. There is no love as pure, unconditional and strong as a mother’s love

On the last episode of the couple’s wedding special, plans to get a pastor, who will bless their union were underway. This week we woke up to a pastor who performed a beautiful matrimony service.

The pastor wished them all the best and delivered a moving statement. He conducted the entire service in style and it was very iconic to witness a pastor blessing a homosexual wedding.

When it was the turn for the lovebirds to say their vows, Somizi struggled to hear the pastor a little bit, and guests laughed when he hilariously said ‘English’ is a problem.

That mouthwatering kiss and wedding vow exchanges, had singletons breathing through the wound and wishing to get hitched like the couple.

Every great wedding is inspired by phenomenal speeches. Family members and friends of the couple delivered some moving speeches congratulating the pair on their new journey of matrimonial.

The dance floor was lit with various performances too and we saw Black Coffee really coming through for the lovebirds in a massive way when he performed a special set on their special day! Black Coffee’s surprise performance was such a moving gesture that it even brought Somizi to tears! Aww, guys!

Champagne was flowing and Somizi even said everything was properly planned so that no guests complain of running short of alcohol, food and guests were transported into the venue and back home with Uber Black.

6. The All-white wedding theme was unmatched.

Somizi and Mohale’s white wedding theme became the talk of the town when the two finally got hitched. This is due to the fact that we have not seen guests at a wedding dressed up in their own wedding outfits before. The theme was very unique and sophisticated as it gave guests an opportunity to dress up like they are going to their own wedding. Somizi asked their guests to stick to the theme of all-white and they did not disappoint in pulling out all the stops to make sure they looked breathtaking.

What a beautiful love story we have had the pleasure to witness on our small screens. The pair will undoubtedly enjoy fruitful and blissful matrimony. From all the haters who spew bile on the couple on social media, yesterday it came to light that against all odds only death will separate them.

The wait is finally over !! Your front row seats are ready to be occupied for you to watch our white wedding only on @ShowmaxOnline –

This was indeed the wedding of the year!!

HOW TO GET SHOWMAX:

Sign up for Showmax mobile and get full access to the full catalogue on one mobile device for R49PM. Vodacom customers can get Showmax mobile plus 2GB data for R99PM.

New customers get a 14-day free trial and then pay R99 per month for Showmax’s standard plan.

DStv Premium subscribers get Showmax free – go to showmax.com to sign up. DStv Compact and Compact Plus subscribers pay R49pm.