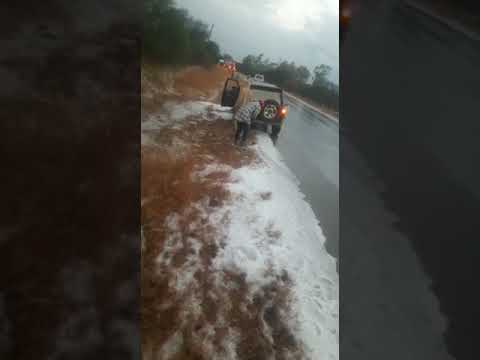 A THUNDERSTORM affected some parts of Matabeleland South on Friday resulting in the fall of hail, triggering a social media frenzy as people thought it was snow that had resulted from falling winter temperatures.

However, the Meteorological Services Department (MSD) yesterday said what was said to be snow was in fact, thinning hail after the area experienced a rare thunderstorm. Director Public Weather Service in the MSD Mrs Linia Gopo said for snow to occur temperatures had to be below zero degrees Celsius among other factors and from the records collected from stations in the province, there were no temperatures recorded below that point.

“So there is a low-pressure system in the middle levels of the atmosphere (upper/high levels) known as a cut-off low. It is typical of a summer season weather system. This system moved into the country from the west (Botswana) on Thursday evening and it moved slowly and thus affecting the western areas of the country mostly Matabeleland South areas and areas around Bulawayo Metropolitan Province on Friday evening.