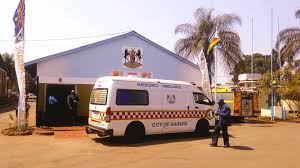 Harare City Council has again come under fire for failing to provide Ambulance services in the whole city with a recent horrible experience where they attended an accident scene on bare feet wit no proper medical equipment.

It is alleged the paramedics who attended the scene had only trauma board, scoop stretchers and jump bags.

This shows the sorry state of City Council with a source disclosing City Council has only one operational ambulance.

“We have only one ambulance at the City of Harare and if you see at the depot you see dozen of dead ambulances, it’s like a scrapyard.” The source discloses.

“We hope government intervenes and perhaps provide with another ambulance.

“Even if our salaries are little, we need resources. Look at sorry state of the Fire Brigade.

“What pains me most is when issues to do with cholera, or recently Covid19 scare come up, our bosses run around more because they know there is a lot of money coming in from donors like UN and World Health Organisation.” He adds.

Those in the management have been accused of misusing public funds but can be seen driving top of the range cars.

Harare mayor Hebert Gomba could not be reached for comment.

Meanwhile, Harare City Fire Brigade failed to extinguish a fire in Mbare because its horse pipe was broken.

Mostly Fire Brigade attends fire scenes without water and this has caused a lot of damages when fires break out.

Nelson Chamisa who leads the main Opposition Party in Zimbabwe MDC has lamented the bad relationship between Central Government and City Council as a cause for poor service delivery because their requests to change budgets often hit a snag.