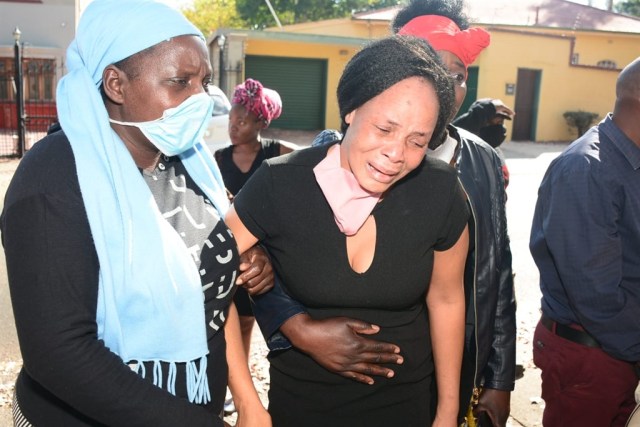 ‘WHY did they use the grinder to kill my daughter? She didn’t deserve to die and not like that. My daughter was brutally murdered by a group of men for nothing.’

These are the words of an angry and helpless father, Manze Guni (48), from Mamelodi, Tshwane.

This was after her daughter, Agnes Guni (25), was heartlessly murdered by allegedly by several men using an electric grinder a fortnight ago.

Manze told Daily Sun that the family needs justice and those who killed his daughter to rot in jail.

“I want to know why they used a grinder to kill my child.

“This is painful she didn’t deserve to die like that,” the father said.

“My daughter promised that she will fly us around as we are suffering and promised us many beautiful things.” he said

He added that her daughter finished an animal doctor course last year in Midlands State University in Zimbabwe.

He also wanted to further her medical studies back in Zimbabwe this year in August.

The family is pleading for justice and wants those who killed Agnes to be in jail.

Manze said he doesn’t know why her daughter was murdered like that.

According to the father, he last saw her daughter on 3 May in Mamelodi, Tshwane when he left her.

“I still remember her last words to me, she told me she was ok but just wanted to check on me,” he said.

Family spokesperson and uncle to the deceased, Chrispen Tapedza Guni told The Mirror that the family is shattered by the murder. He described the deceased as a young graduate bubbling with ambition and looked for a job so that she could earn money to further her education. The girl always promised her parents a better life, said the uncle.

Two Zimbabweans who are key suspects in the gruesome murder appeared in court in Mamelodi today. One of suspects has been identified as Thabani Mtandavari from Gokwe and the other one was only named as Rasta.

The motive of the murder is still not clear although the suspects are understood to be people who lived in the deceased’s neighbourhood.

He said Guni was working in Mamelodi and they last communicated with her on May 4 2020 and she never reported for work until family members started searching at all police stations around the town. He also said they were later informed by the police of the availability of an unclaimed body at one of the mortuaries and that is when they identified the body which was now in a bad state.

“We used to communicate with her but on May 4 she went silent. The following day she did not report at her workplace. We waited for the required period so that we can file a missing person report which we later did. Investigations were done and finally, police got information that there is a body at one of the mortuaries and on May 14 we positively identified the body. She was cut into pieces using a grinder and her attackers wrapped her body parts with a curtain and dumped it into a dustbin which they dumped in a pavement.

“During investigations tree leaves and the curtain which were used were identified by neighbours leading to the arrest of one Thabani Mtandavari who comes from Gokwe. Mutandavari identified his accomplice who he only identified as Raster. We continued to investigate as a family and our investigations revealed the identity of Raster as Trademore Sithole who had cut his hair and the two are now in police custody. They appeared in court today and will appear again next week” said Guni.

The father of three said he lost a beautiful soul and her daughter had big dreams for herself and the family.

Agnes’s body was repatriated to Zimbabwe on Thursday to be buried at her country of birth.

“A systematic search for clues had led the police to a house on the same street where the suspect was reportedly found.

“The suspect is expected to face a count of murder and defeating the ends of justice in the Pretoria Magistrate’s Court soon,” he said.

Mavimbela added that a second suspect a 25-year-old man was caught in Mamelodi this week Tuesday.

Mavimbela says they are both expected to appear in court soon and investigations are continuing.-Daily Sun/Masvingo Mirror