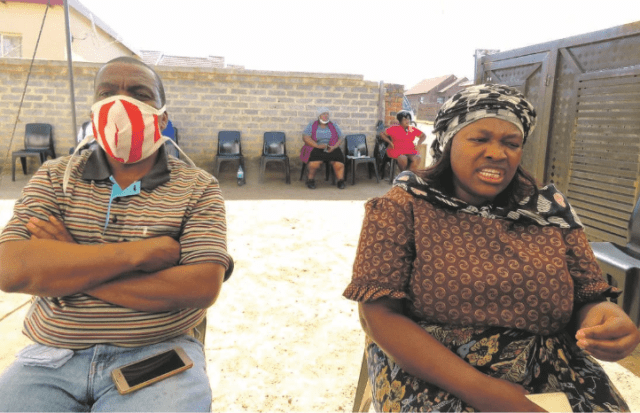 AMOS Mahlaba (54), his wife Dima (43) and daughters Lethabo (12) and Nikiwa (13) did everything together and were together when they died at home in Sebokeng, Vaal on Saturday.

They allegedly inhaled smoke from a gas stove. Dima was found dead in the kitchen by neighbours, Amos in the main bedroom, while the girls were found in another room.

Neighbours noticed the smell and tried to call the family. But there was no answer and they jumped over the fence and opened the door. They were greeted by the gas, followed by Dima’s body and the rest.

“We blame Eskom,” said Dima’s sister Nkadimeng Phiri (39). “They’ve had no electricity since October last year. Eskom wanted residents to pay R6 000 before they can give them back electricity, so they resorted to a gas stove.”

“He didn’t leave them behind wherever he went. It’s sad they didn’t leave each other when death came. We’re shattered.”

Johannes asked: “How many people should die before they feel any remorse? I feel like they are saying ‘no matter what happens, we don’t care, we only want our money’.”

The family said they wanted the utility to account for itself. “They haven’t even come to say they’re sorry. It shows they don’t care. Only the municipality, councillor, the ANC and the community have helped us through this time. We’re grateful to them,” said Nkadimeng.

The family said they planned to bury the four on Saturday.

Eskom spokeswoman Reneiloe Semenya told Daily Sun they have been engaging the residents of Sebokeng around the growing concern about illegal connections, meter bypasses and vandalism of electricity infrastructure that result in equipment failure.

She said this was done to resolve the power outages.

For Eskom to restore supply, it has to conduct audits to identify the source of the outage and correct it. “The community hasn’t allowed Eskom access to conduct audits to remedy the source of the outage. We urge residents of Sebokeng zone 6 to grant Eskom access to perform its duties.” She said they’d like to convey their condolences for the loss of life.