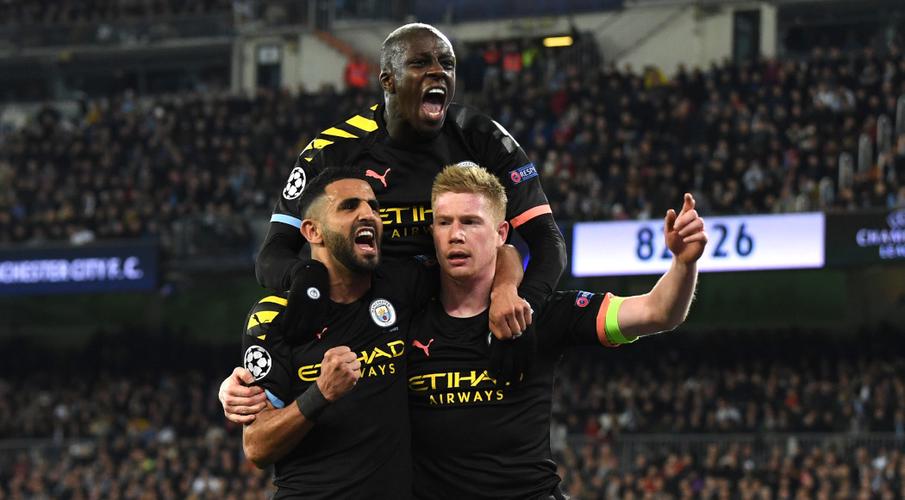 After a cagey first half, the hosts capitalised on a defensive mix-up between Rodri and Nicolas Otamendi to take the lead as the impressive Vinicius Junior raced towards goal before neatly squaring for Isco to slot home.

Sergio Ramos shot over as Real Madrid looked to double their advantage but City equalised 12 minutes before time when Jesus nodded in from close range.

It was the least City deserved for what had been an impressive away performance by Pep Guardiola’s side and things got even better seven minutes from time when substitute Raheem Sterling was brought down inside the box and De Bruyne stepped home to confidently convert from the spot.

It got even worse for Real Madrid when they were reduced to 10 men with five minutes remaining. Ramos brought down Jesus as he ran through on goal and the defender was shown a red card.

It was the first time City had beaten Real Madrid in the Champions League and means they are in the driving seat before the second leg at the Etihad on Tuesday, 17 March.

The win will have been all the more welcome for City fans after their side were earlier this month banned from European club competitions for the next two years.

The club’s appeal against the decision has been registered by the Court of Arbitration for Sport, and the issue will continue to overshadow their immediate future, but this display in Madrid will give them hope of progressing far in the current campaign.

This was a hugely impressive result for Manchester City and one for which Guardiola deserved a large amount of credit after he sprung a surprise with his team selection.

The former Barcelona boss left Sterling, Sergio Aguero, David Silva and Fernandinho all on the bench and instead utilised Bernardo Silva and De Bruyne as alternating false nines in what appeared to be a very cautious City formation.

But it was a tactic that successfully nullified a Real Madrid side that has historically been so strong in the knockout stages of the Champions League and had not lost their 12 previous knockout games under Zinedine Zidane.

The hosts were limited to one decent chance in the first half – when Ederson saved superbly from Karim Benzema’s header – while City’s threat on the counter increased as the half went on.

City looked like the most likely to score as the game wore on but all their good work threatened to be undone when Real pounced on a rare defensive error from City.

But, to the visitors’ credit, they fought back strongly despite that setback and the introduction of Sterling proved pivotal as the forward provided a different outlet for City as they turned the game around.

In the end, they could have perhaps won by more – with Ramos preventing Jesus from getting his second – but two away goals put Guardiola’s side in a strong position to reach the quarter-finals and keep them on track to end their wait for Champions League success.

Tottenham Hotspur midfielder Dele Alli has been charged by the Football Association over a post on social media about coronavirus.

Alli, 23, put a video on Snapchat in which he joked about the outbreak and appeared to mock an Asian man.

He later deleted the post and released a new video on Chinese social media platform Weibo to apologise, saying: “I let myself down and the club.” read more