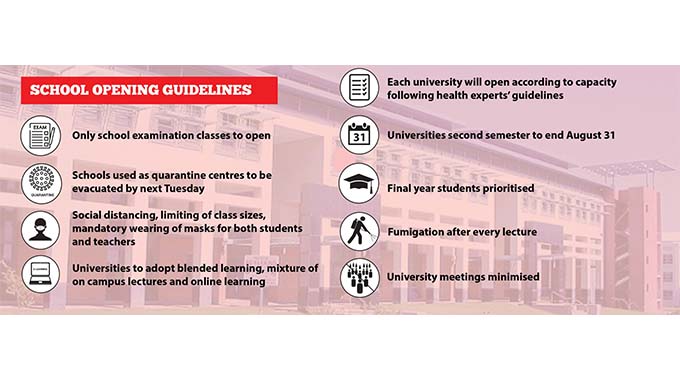 CABINET yesterday released strict guidelines that will see schools reopen with limited class sizes at a time when universities have been given up to August 31 to complete the second semester of the 2019/2020 academic year.

Schools and universities prematurely closed on March 24 when Government announced Covid-19 mitigation measures before imposing a national lockdown that has been extended indefinitely under level two regulations.

In announcing the indefinite level two lockdown last month, President Mnangagwa said schools and universities should plan to reopen gradually.
Schools will now open for examination classes when prevention measures such as social distancing, limiting of class sizes, hand sanitisation and mandatory wearing of masks have been put in place.

On the other hand, the Ministry of Higher and Tertiary Education, Innovation, Science and Technology Development, following consultations, allowed universities to reopen from Monday this week under a blended learning programme.

Blended learning is a mixture of on campus lectures and virtual or online learning.

Both schools and universities are required to follow health guidelines to prevent the spread of Covid-19.

As of Monday, the country had recorded 203 Covid-19 positive cases, a jump from 56 recorded last week on Sunday.

During a post-Cabinet media briefing last evening, Information, Publicity and Broadcasting Services Minister Monica Mutsvangwa said all schools that have been used as quarantine centres will be evacuated next week on Tuesday in preparation for the reopening of schools.

She said the recent spike in Covid-19 cases had derailed the reopening of schools.

“With regard to education, Cabinet noted the detailed operational plan that has been put in place by the Ministry of Primary and Secondary Education that was developed with stakeholders. However, following a marked increase in Covid-19 cases, Cabinet approved that only examination classes should initially open and this can happen when conditions of prevention measures are in place. These measures include social distancing, limiting of class sizes, hand sanitisation and mandatory wearing of masks for both students and teachers at all times. Students will be expected to return home immediately after the examinations.

Depending on the outcomes of the first phase, the way forward, can then be mapped for other classes. The Minister of Primary and Secondary Education (Cain Mathema) will subsequently issue a date for the commencement of the other classes,” she said.Higher and Tertiary Education, Innovation, Science and Technology Development Minister Professor Amon Murwira told Chronicle that the reopening of universities is a product of consultations and follows health experts’ guidelines.

“We expect that universities are rolling out their programme of reopening. But let me explain in real strategic details. We expect, according to the meeting we had with Vice Chancellors that between June 1 and August 30, they would be have finished with the second semester which we were in before they closed. Each university will open and implement according to their capability,” said Prof Murwira.

“So, details of who opens when, who closes when, now rest with the universities. But what we know strategically is that by August 30 we would have completed the second semester, everything being equal. Our priorities are going to be with the final years.”

Prof Murwira said Government will not be rigid on universities, but will be realistic guided by the situation on the ground. “We shall be practical as we can. And at the end of the day we need to deliver. When the President made the pronouncement that we shall open gradually, he meant that you shall use your brain on what works and avoid things that don’t work,” said Prof Murwira.

The National University of Science Technology (Nust) has scheduled its reopening for Monday next week.

The university said it consulted students, academic staff as well as non-academic staff before announcing its reopening schedule. Nust’s acting communications and marketing director Mr Thabani Mpofu said the institution will provide personal protective equipment to all students and lecturers when it opens as part of Covid-19 preventive measures.

“This plan that we are proposing is not just coming from management, but it is through consultation. We also shared this with the Ministry and they are aware of our reopening plan. All our returning final year students are going to be given two face masks each. We will also give the same to staff members. What we are going to be doing is sanitizing all our points of entry. We are also sanitizing them when they enter the lecture rooms. We are going to be fumigating lecture rooms before and after lectures,” said Mr Mpofu.

He said students will be required to be on campus an hour before lectures and should leave Nust’s premises an hour after lectures.

Mr Mpofu said due to the threat posed by Covid-19, students and lecturers should not expect the traditional ways of doing things such as group work. He said the university will minimise meetings. Nust student representative council president Mr Innocent Dombo said while the institution’s reopening programme is a product of consultations, students will face difficulties due to economic challenges.

Mr Dombo said students were concerned about rentals being charged in forex as their parents and guardians are not paid in foreign currency. He said some students who stay in western suburbs might be affected by transport problems and fail to reach campus on time. “We hope that Zupco will avail buses specifically for our students. We have a Nust bus but it cannot accommodate everyone. So, we need more buses and kombis specifically to transport students,” he said.

Lupane State University (LSU) which is being used as a quarantine centre is waiting for Government to release returnees from the institution before reopening for students.

Dynamos To Face Highlanders In The Independence Cup