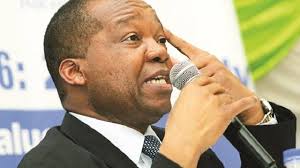 THE coming in of more fuel service stations licensed to sell in foreign currency will not jeopardise the de-dollarisation process, but will increase options for motorists and help bring more forex from the free funds category into the formal system, the Governor of the Reserve Bank of Zimbabwe, Dr John Mangudya, has said.

Dr Mangudya’s remarks follow his announcement during the 2020 Monetary Policy Statement last week that companies and individuals with free funds were free to seek permits to import fuel and sell in forex to arrest shortages.

The Zimbabwe Energy Regulatory Authority, which does the licensing, has already made it clear that applicants will have to meet a number of conditions. Under the present system, service stations permitted to sell in foreign currency have to show that the funds they plan on using to import the fuel are legitimate.

Zera also has gone to great lengths to ensure fuel in the general market, bought with Zimbabwe dollars for resale in Zimbabwe dollars, does not into leak into the fuel sold for forex.

And Zera has also implied it will be fairly issuing forex licences looking at the geographical spread of forex stations. Zuva, one of the three largest oil companies with a large number of service stations, has already given an indication of how the future might play out by announcing that just eight of its many stations, four in northern Harare and one each in four other cities, will be converting to forex stations.

The biggest downside to mass use of forex stations is that forex fuel attracts a higher duty, so even at interbank rates it is significantly more expensive than fuel in the general market. At black market rates, a motorist using mobile money to buy US dollar banknotes to buy forex fuel will be paying in the end almost exactly twice the price of general Zimbabwe dollar fuel.

Dr Mangudya insisted that de-dollarisation was a process which the authorities hope to conclude in the next five years, all things being equal.

He said the call for people with free funds to import fuel and sell in forex does not signal that the de-dollarisation process has failed.

Dr Mangudya said in the DRC, 70 percent of transactions remain in forex despite a path to de-dollarisation. Belarus is now in its eighth year of de-dollarisation but forex is still used in some areas. Many countries have attempted to de-dollarise but a few such as Israel, Poland, Bolivia and Peru have succeeded on the back of a comprehensive policy package needed to reduce financial dollarisation.

Dr Mangudya said for Zimbabwe, the measure of de-dollarisation is the value of deposits held in forex.

He said presently, US$785 million is held in forex, translating to about $12 billion, which represents 36 percent of total bank deposits which were $34,50 billion as at December 31, 2019. The balance of 64 percent is local currency.

“So don’t condemn people who are using free funds. Free funds have always been there even during the 2008 hyperinflation”.

He said he expects that in five years, citizens would have changed their attitude towards the local currency.

“Right now, it’s too early to expect everyone to be using the local currency after 10 years in dollarisation,” Dr Mangudya said. “Once inflation stabilises and we have a stable environment, people will be happy to use the Zimbabwe dollar”.

Government wants monthly inflation to be between 2,3 percent and 5 percent throughout the year.

Dr Mangudya believes US dollar transactions are small, especially at food outlets such as Chicken Inn and Chicken Slice, which may not reach US$1 000 per day. He insisted that the acceptance of the local currency by such traders means they were not against it, which is a boon for the de-dollarisation drive.