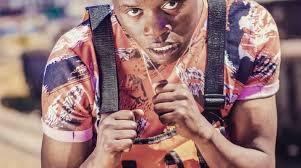 Rapper Ti Gonzi quit drugs. The outspoken singer roped in Madzibaba Bond Gumira Junior whom he said is providing for his professional needs. Award-winning Rapper Tinashe ‘Ti Gonzi’ Gonzara says he has quit drugs after acquiring the services of a new manager.

He said ever since the coming in of Madzibaba Bond in his career, things have changed for the best. “The devil is a liar, I have stopped taking drugs and all is going well. “I have appointed Madzibaba Bond as my manager and we have a contract which is so lucrative.

“Everything is going well and several things have changed in my life. “My manager is working very hard and the results are already being seen. “My life is now safe and I am at a comfortable situation,” he said. He added:

“I am now living a decent life where I am eating proper food which is needed by any celebrity. “I am now staying at a proper house and enjoying all the benefits of a celebrity.  “Now I am also driving a sports car and it shows there is a great improvement in my life.” Ti Gonzi also explained the significance of a manager.

“I might work hard musically but if I don’t have a manager who is aggressive business-wise there is nowhere I am going. “My manager is making sure I am getting everything I deserve and also promoting the brand which is already growing.

“There are certain people who take advantage of artistes and use them for their benefits without considering efforts put, so my manager has structured everything to do away with such people.

“In life we need each other and not only milk artistes. “With the intervention of my manager I can now hold a show on my own without being exploited, I no longer need to sell shows or birthday bash because I now have the capacity to hold on my own.”

“The disadvantages of begging to record or use fame are that the producer can still upload the song on social media platforms and still claim royalties because he will be putting his watermark.

“If I pay it means it’s business and if I am done in the studio I will be in total control of my songs and there will be no chance for putting watermarks. “It’s a positive attribute in my music career and we are not growing any young.”

Similar sentiments were echoed by Madzibaba Bond who leads a sect in Chitungwiza’s Unit N suburb. “I have been working with Ti Gonzi for a long time but behind the scenes. “I am now managing him and he is a hardworking artist who is eager to achieve goals.

“We have a contract which runs for a long period. “It includes that I will be responsible for his studio time, marketing and even social aspects among other things,” he said. He added: “He has the talent so I only need to complement it.

“I won’t change him but I will only make him better. “I am also helping his spiritual growth as well.” Madzibaba Bond also said part of the plans are to open a recording studio in Waterfalls, hold several shows and get corporate endorsements.

“We are going to open a big studio in Waterfalls which will benefit many artistes and Ti Gonzi mostly. “As a manager, I am going to expand his fan base and continue winning hearts of many.”

Meanwhile, Ti Gonzi is putting final touches on his new album titled Ghetto hip hop volume 2. He recently put a voice on Boss Gaga’s Riddim which is being produced by Malone Tee of First Class Records.