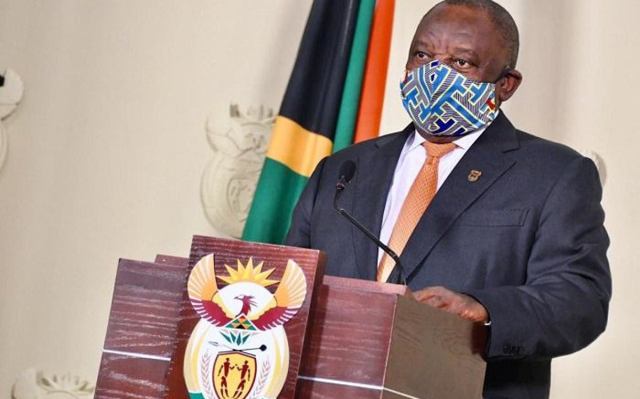 President Cyril Ramaphosa has announced that the whole of South Africa will move to level 3 lockdown from 1 June.

In a media briefing on Sunday evening (24 May), Ramaphosa said that this will include the reopening of all districts as well as key areas of the economy.

He added that the government will take a ‘differentiated approach’ to hotspots which have cases of more than five active cases per 100,000 members of the population.

Ramaphosa said that he is particularly concerned about the City of Cape Town which now accounts for half of all the country’s cases.

President @CyrilRamaphosa is addressing South Africans this evening on developments in our country’s risk-adjusted strategy to manage the spread of COVID-19. pic.twitter.com/O6A3TMUIAD

Ramaphosa said that these hotspots will be reviewed every two weeks. He added that any part of the country could be moved back to levels 4 or 5 where a spread of infections is seen.

He said that districts which have fewer cases could move down to levels 2 or 3.

The president said that there are now 22,583 confirmed cases of coronavirus in the country – an increase of  1,240 cases from the 21,343 cases reported on Saturday.

He said that the total number of deaths has now reached 429 – an increase of  22 deaths from 407 reported before.

Ramaphosa said that all areas of the economy will be allowed to reopen from 1 June – with the exception of a few key areas.

Other changes announced by Ramaphosa include:

Public gatherings and other high-risk activities, especially those that involve close contact between large numbers of people, remain prohibited to prevent the spread of the coronavirus. pic.twitter.com/HD3aEOQD6I

The announcement comes exactly 10 weeks after South Africa announced a state of national disaster around the coronavirus pandemic.

Ramaphosa apologised for harsh restrictions but noted that the lockdown has bought South Africa time to prepare for an anticipated surge in infections.

“I am sorry that these measures imposed great hardship on you – restricting your right to move freely, to work and eke out a livelihood.

The president said that the government has used the time during lockdown to build up an extensive public health response and prepare our health system for the anticipated surge in infections.

He added that projected models show that the coronavirus in South Africa will get much worse before it gets better. He said that the models also show that cases will be highly dependent on actions taken by the public.

“Now it is time for most of us to return to work and to resume parts of our lives that have been on hold since the lockdown began.

“However, I want to emphasise that the easing of some restrictions does not mean that the threat posed by the coronavirus has passed or that our fight against the disease is over.

“In fact, the risk of a massive increase in infections is now greater than it has been since the start of the outbreak in our country,” the president said.