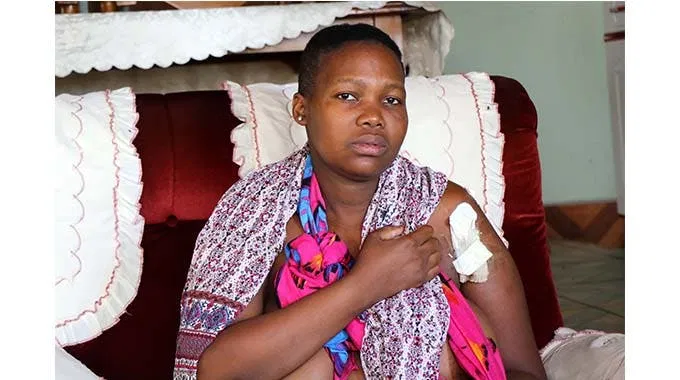 In a very disturbing development, a pregnant woman was allegedly shot and injured by police during a high-speed chase in Lupane.

iHarare has established that Sithembiso Moyo (28) from Pumula South, Bulawayo was shot on December 28 last year near Lupane Centre and she sustained a deep wound and fractured left shoulder. She was shot along the Bulawayo-Victoria Falls highway after boarding a suspected stolen kombi with her two children.

On a fateful day, Sithembiso together with her two children had boarded the kombi in Sabela Village going to Lupane Centre en-route to Bulawayo when three police vehicles started pursuing the commuter omnibus suspected to have been stolen.

Speaking during an interview with The Chronicle, Sithembiso revealed that while heading towards Lupane Centre, three police vehicles started chasing the kombi and started shooting it from behind.

“As we were heading towards Lupane Centre I heard bullets hitting the vehicle. I then hurriedly tried to hide my two children under the seats so that they could be safe from the bullets. In the process that is when a bullet hit my left shoulder,” she said.

Before the kombi plunged into a river, the driver and a teenager jumped from the moving kombi and escaped, leaving her behind with the granny who had also been in the kombi.

“The driver and the teenager then jumped from the moving vehicle and fled before the kombi fell off a bridge and stopped. Police tried to track them down but failed,” she added.

Sithembiso who is five months pregnant was then ferried by an ambulance to Mpilo Central Hospital in Bulawayo where she was admitted. She however was discharged after some days as there were no specialists to assist her.

She is currently appealing for assistance to get special treatment as she cannot afford the medical expenses. Moreover, the police officer who shot her still hasn’t paid the medical bill.

“I buy painkillers for R300 every week and I am dressed by an individual here once a day, instead of twice as per doctor’s instruction. I am charged R50 for dressing daily which is difficult for me to afford.

“The police officer who shot me, a Nkala, promised to foot medical expenses but he has gone silent,” said Sithembiso. -iharare