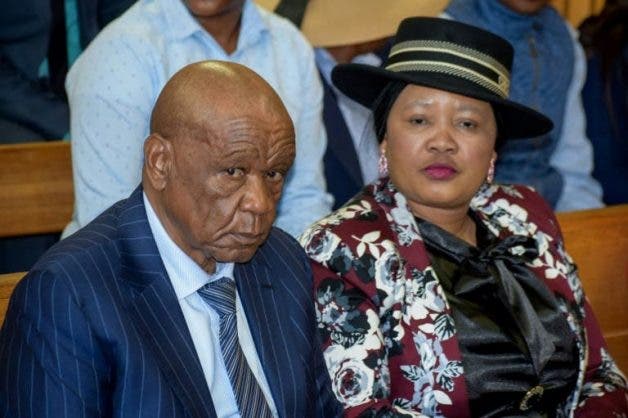 Thabane and his then-wife Lipolelo Thabane, 58, were in the middle of a bitter divorce when she was shot and killed.
Lesotho’s former prime minister Thomas Thabane and his wife paid assassins a down payment of $24,000 (just over R400,000) to kill his estranged wife Lipolelo three years ago, according to a police affidavit seen on Wednesday.

The details were the latest twist in a scandal that has rocked the southern African state and prompted Thabane to resign last month under pressure over accusations he hampered the investigation.

Thabane and his then-wife Lipolelo Thabane, 58, were in the middle of a bitter divorce when she was shot and killed outside her home two days before her husband’s 2017 inauguration.

Thabane has not yet been charged, but the police said he was involved in the plot to kill Lipolelo using hired killers and his wife Maesaiah is in custody accused of murder.

Hours before she was shot dead on the outskirts of the capital, Lesotho’s former first lady, Lipolelo Thabane, made a surprising decision.

In an affidavit filed on Tuesday but seen by AFP on Wednesday, Deputy Commissioner of Police Paseka Mokete said Thabane and Maesaiah “wanted the deceased dead so that (Maesaiah) …could assume the position of First Lady”.

Ex-premier “Thabane physically pointed out the residence of the deceased to his co-accused,” Mokete said.

Police have said they found Thabane’s mobile number in communications records from the crime scene.

Thabane has denied involvement in the murder. He married Maesaiah two months after the death of Lipolelo.

The police commissioner said the couple had promised to pay the killers the equivalent of $179,485, which was to be paid in instalments.

“They would be remunerated in cash… and through employment opportunities, should they carry out the murder of the deceased prior to (Thabane’s) inauguration as prime minister,” Mokete said.

One of the accused killers has since turned state witness.

Maesaiah, 43, was charged with murder in February and spent half a night in jail before a High Court freed her on a 1,000 maloti ($57) bail.

She returned to custody last week after a court revoked bail. She applied for fresh bail on Thursday and a hearing is scheduled for 16 June.

In the application, she sought release to allow her to take care of her “critically ill” husband who has “been diagnosed with an advanced prostate cancer” for which he underwent an operation in South Africa on 29 May 2020.

SAD: Girl (15) loses virg_inity to man (40) after being promised heaven on earth…