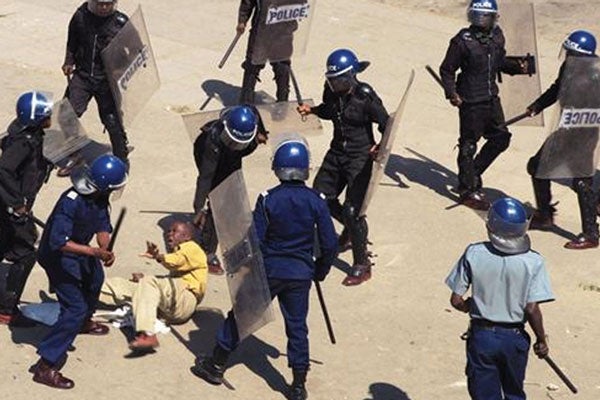 Police besiege CBD to thwart MDC flash demo. Most parts of the city were under heavy police guard with security teams in riot gear deployed at strategic points across the city centre while roadblocks were also mounted in various areas.

Police in Bulawayo were on Tuesday out in full force in anticipation of a flash demonstration planned by the opposition, Movement for Democratic Change (MDC). This comes after the MDC warned it would embark on spontaneous demonstrations countrywide against the deteriorating economic situation.

Last week Wednesday, while addressing a press conference at the party headquarters in Harare, MDC leader Nelson Chamisa said 2020 was a year of action and his party would stage many public protests.

This was after embarking on a tour of provincial structures across the country. Chamisa reportedly told party members that they would engage in spontaneous demonstrations and would not notify the police of their intentions as required by the law.

In an interview with CITE, MDC Bulawayo Provincial Spokesperson, Swithern Chiworodza, accused the police for concentrating too much on the opposition and not tackling crime.

“The police are suffering from paranoia and are smelling Chamisa and eating Chamisa,” he said referring to the police’s preoccupation of what the MDC was up to. As for holding a demonstration, the provincial party spokesperson noted it was “yet to come” but would not be done abruptly.

“The party decided to engage in flash floods as authorities abuse the law by wanting notifications. Besides three weeks ago youth in Bulawayo partook in a successful demonstration along Fort Street protesting over a series of shortages and calling for reforms,” he said.

Chiworodza added that at the appropriate time, people would mobilise themselves as they had genuine concerns over how the country’s socio-economic situation was imploding.

“But for now, the police are showing off their poverty in terms of lack of security intelligence. They lack proper intelligence and are fumbling in the dark. Instead of gathering on streets, they must tackle housebreaking in the suburbs,” said the provincial party spokesperson.

Last year in August, anti-riot police were also prepared to thwart any attempts by MDC members who had planned a series of demonstrations across the country. Water cannons were on standby at the Large City Hall, while an army helicopter hovered above the city, with police officers on horseback and others on foot continuously patrolling the streets.

The MDC provincial offices were also sealed off, with the police barring anyone who attempted to access the building.

At the Tredgold Magistrates Court, where a court case to hear an MDC appeal against the prohibitive order issued by the police was underway, the police maintained a heavy presence.

Some members of the MDC who wanted to offer support for their national chairperson Thabitha Khumalo and five other party members who were arrested in Tshabalala suburb for distributing fliers urging residents to attend their planned demonstration that time were turned away.