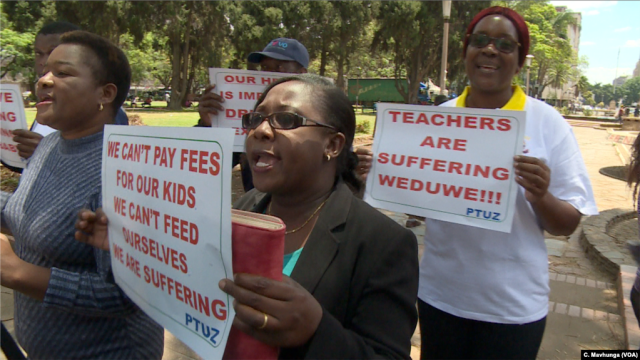 Every civil servant must be paid in foreign currency.

Business is now refusing to take payments in bond notes, EcoCash and swipe or transfer.

Why would business accept a currency that is quickly losing value on a daily basis? It does not make sense for them to accept it, of which they will need to go to the black market and convert it to the greenback.

The government has already allowed other players in the market to accept foreign currency, for instance, the Zimbabwe Revenue Authority and several service stations.

Now we have four currencies, the US$ which is legal in some sectors of the economy, but illegal to the general populace, which is only allowed to use the other three currencies – EcoCash, Real Time Gross Settlement and bond note.

It does not make sense for government to collect revenue in foreign currency and pay its workers in local currency.
It would be much better to officialise the re-dollarisation of our economy.

Last week when I heard that government had gazetted the minimum wage for domestic workers at $160 local currency, I tried to convert it to the US$, and saw it was equivalent to US$6 on the black market.

I then converted salaries for our civil servants, most of whom are earning $1 000, which I found to be equivalent to US$36.

Just under five years ago, they used to get around US$400.

Zimbabwean problems are man-made. The government is being rejected by its own people.

Actually, I know a cornered government when I see one. President Emmerson Mnangagwa’s government has no way out.

Now the whole country is pleading poverty, and according to the United Nations, poverty is considered as undermining economic, social, political and cultural rights.

ZANU PF will punish teachers who refuse to support the ruling party, ED