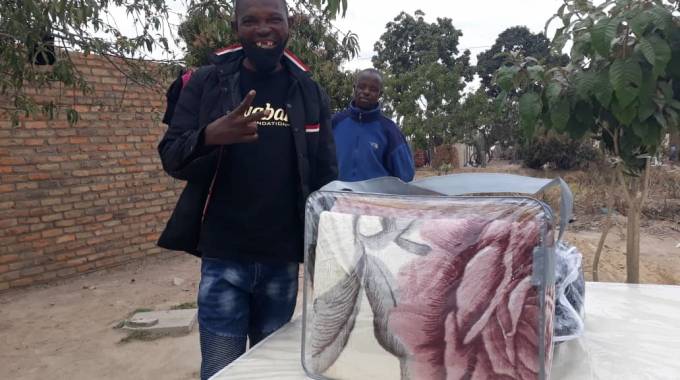 ACTOR Charles “Marabha” Mapalume was all smiles yesterday after he received a bed and blankets from US-based prophet and music fanatic, Passion Java.

Marabha, who has been unwell at his Epworth residence in recent weeks, got help from the man of the cloth after his plight shared on social media.

And yesterday Mahwindo Foundation, under the instruction of Passion, bought and delivered the bed and blankets as was promised.

“My driver went and left the stuff which was bought by Prophet Passion who sent us money to buy Marabha’s blankets and bed after we learnt that he was sleeping on the floor.

“We bought him a King Size bed and he welcomed the donation and thanked Prophet Passion for his gesture,” she said.

However, Marabha was forced to look for a room at his brother’s apartment after the bed failed to fit in his room.

“The bed failed to fit in his (Marabha) room since it was so big that his brother they had to swap rooms with the actor.

“It could have been another crisis had Marabha failed to find another room but we are glad that Prophet Passion and Honourable Minister Tinoda Machakaire have pledged to build a new house.

“From now onwards, we are now focusing on building Marabha’s new house where he can fit his property.

“There are people like Zodwa who weighed in with major donations such as 100 bags of cement while Prophet Passion Java and our Deputy Minister Tinoda Machakaire have pledged to assist in the building of the house.

“We hope to speed up the process of constructing the house,” she said.

Mahwindo said she was humbled by the faith individuals and other high profile people had bestowed in her foundation to deliver the aid on their behalf.

“Being send and delivering the aid I receive from high profile people means a lot for me and my foundation.

“I am only using my influence to do this job and I am humbled that people now trusts me as a mother and not the old Mahwindo they knew.

Marabha was at a loss for words after receiving the consignment from Passion.

“I would like to Prophet Passion for the love he showed us, may the Lord continue to bless him in his efforts,” he said.-H metro

READ MORE: Man arrested for allegedly fatal shooting of his mother in Mpumalanga
READ MORE: JUST IN: Obadiah Moyo Has Been Arrested By ZACC