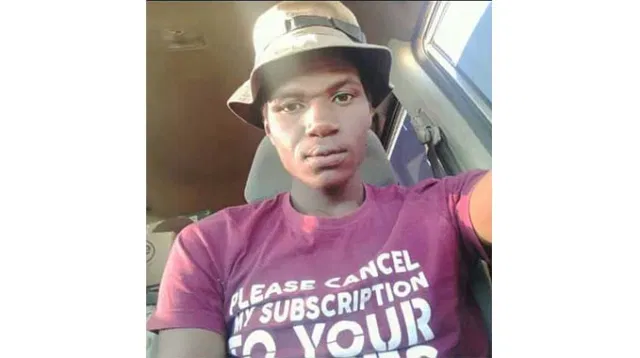 A 23-YEAR-OLD National University of Science and Technology (Nust) student was br-utally murdered by three assailants who allegedly hired him on the pretext that they wanted him to ferry their goods to Roseburn near Solusi.

The suspects, who are still at large, buried the deceased’s body in a shallow grave before they planted aloe vera on it in a bid to conceal evidence.

The vehicle he was driving is yet to be recovered.

The now deceased, Thembinkosi Sishoma of Bulawayo’s Pumula South suburb, went missing on December 1. Police and his relatives had since then been making frantic efforts to locate him until Sunday when his mutilated decomposing body was discovered buried in a shallow grave near Mananda Dam along Solusi road.

Thembinkosi was a first-year student studying Environmental Science at Nust.

A Chronicle news crew yesterday visited the deceased parents’ home in Pumula South where mourners are gathered.
The family members and neighbours said they were shocked by Thembinkosi’s murder.

He said the deceased was hired by three men to ferry their goods to Roseburn near Solusi on December 1.

“On December 1 shortly after 4PM, my son was driving a friend’s car, a blue Honda Fit, along Ntemba Road in Pumula East when he was stopped by three men. Upon stopping, the trio purported to be omalayitsha whose car had developed a mechanical fault. They approached him under the guise that they wanted him to ferry their goods to Roseburn along Solusi Road,” said Mr Sishoma as he struggled to hold back tears.

He said Thembinkosi was travelling with his two friends when he met the three men.

“The three men asked my son to drop off his friends, saying they couldn’t all fit in the car and he complied before they proceeded to their destination. He didn’t return on that particular day and we got worried since there was no communication and his phone was not getting through until we decided to go to Roseburn to look for him,” he said.

Mr Sishoma said they then reported the matter to the police. “We continued searching for a number of days after we got information that the car was spotted at Scott Business Centre along Solusi road. Locals also indicated to us that they saw the car driving past the business centre at high speed,” he said.

Mr Sishoma said they continued with the search and went as far as Tshefunye in Tsholotsho.

“When we got to Tshefunye, locals said they had spotted the car fuelling and that they got suspicious when the occupants were not interested in opening the tinted windows of the car. They told us that the car proceeded to Tsholotsho centre about 50km from Tshefunye,”

Mr Sishoman said they went to Tsholotsho four times but could not find the car or their son.

“On Sunday, December 13 that is when we got a call from Figtree police asking us to come to Manada Dam along Solusi road, where a body had been discovered. We don’t know whether they killed him there or they just buried him there,” he said.

Mr Sishoma said his son was buried in a shallow grave and covered with some aloe vera plants.

He said the body was in a decomposition state and had multiple stab wounds.

Mr Sishoma said the suspects stole US$250 which his son intended to use to buy a laptop for use at Nust.

Thembinkosi’s friend Mr Clifford Pfirwe with whom they used to sell fuel together, said he last saw the deceased on December 1.

“Since universities were closed, Thembinkosi was not going to school. We were now in the business of selling fuel until he got a part time job of driving a Honda Fit. On December 1 at around 4PM, I got information from his other friends that he had been hired by three men to Roseburn but never returned,” he said.

She said the body was discovered by a local herdboy who then alerted police.

“We suspect the body was dug up by wild animals and dragged for a few metres from the shallow grave,” said Insp Mangena.

The vehicle has not been recovered. —Chronicles