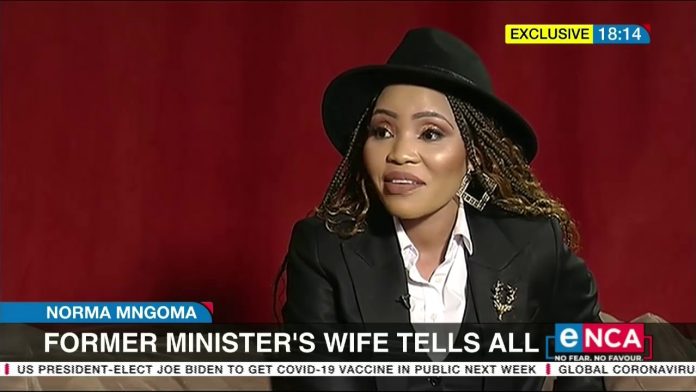 The South African Former minister Malusi Gigaba is a “p_rn addict who is always watching p_rn”.

This is according to his estranged wife, Norma Mngoma, who hung out the couple’s dirty laundry during an interview with eNCA which aired on Thursday evening.

“It’s just that he has a problem of p_rn addiction because he is always watching p_rn. And sometimes for him it is a fantasy with those people, and those people would catch feelings and then Malusi is gone,” she said.

She added that many of the other women would tell her about the affairs, “and it would start from there”.

“To Whom It May Concern. Please note that I shall not be commenting on any aspect of the Moja Love TV audition which will be airing on eNCA at 18h00, tonight. My energy is exclusively reserved for my fight with the askaris who are the de facto puppet masters. #LongLiveTheAnc!” he wrote.

Mngoma, who has ditched Gigaba’s surname, is in a legal spat with her estranged husband after a breakdown in their marriage. Divorce proceedings are under way.

For the first time, Mngoma shared intimate details of how her husband used the marriage to hide his extramarital affairs, allegedly with multiple women.

Speaking about what finally ended her marriage Mngoma said: “It was a lot of things. For me, it’s him not wanting to take responsibility for his actions and not wanting to be held accountable. Every time he does something wrong then he will say that it was a political campaign.

“Also, what I did not like is that each and every time when he did something, when he writes a statement, he will say ‘my wife and I’ without coming to me. Every time I used to tell him that this is such disrespect. I told him that he needs to be decent enough to come to me and tell me what happened, because for him it is not that he really wants a relationship,” she said about the women who fell in love with her husband during the affairs.

On the infamous leaked video showing Gigaba playing with his p_nis and uttering “imagine this in your mouth”, Mngoma confessed that this was a classic case where, after being caught cheating on his wife, he told the nation that the video was intended for her.

Laughing, she said: “That was not my video. Like, I don’t want to lie. I have never imagined something like that in my mouth … so it was not for me. So I do not know who it was meant for. I don’t even know if he knows who he sent it to because there are a lot of those. They are his videos, not mine.”

Meanwhile, she said that she didn’t fear for her safety after the bitter split.

Mngoma said she has been warned on numerous occasions that “she will disappear, you know the comrades” if she continued talking about her marriage.

“I am so chilled. It is up to him if he wants to be civil, because that is what I proposed before the whole drama. They can threaten me but I know what to do. There is law out there … as much as he thinks he knows people in positions and he has power over them, but even the Hawks can be held accountable. I know my rights. I have the best legal team so I am not scared of anything, especially him,” she said.-timeslive