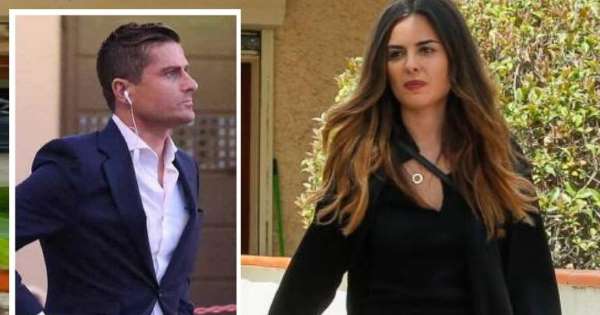 News anchor caught cheating when lover appeared half-n@ked on live broadcast. Alfonso Merlos from Spain was broadcasting a segment for a local news show, Estado de Alarma, when a half-n@ked woman – who it later transpired wasn’t his girlfriend – made a surprise appearance, People reports.

This journalist gave viewers a little bit more than they expected during an at-home news broadcast. The 41-year-old news anchor was broadcasting remotely amid the coronavirus pandemic, which has left many people in self-isolation and lockdown in their homes. But during his live appearance, a woman nonchalantly walked by behind him in nothing but her br@ and p@nties – seemingly unaware of the countless viewers.

It wasn’t long before many viewers pointed out that this woman wasn’t Alfonso’s girlfriend, Marta López, who’d starred in Spain’s Big Brother reality series. It was instead Alexia Rivas, another journalist, Mirror reports.

Alfonso was accused of cheating on Marta and that he’d been caught red-handed on live television. At first, Alfonso didn’t say anything for a couple of days but he later opened up about the incident on The Ana Rose Show. He revealed that he’d broken up with the former Big Brother star and apologised for any unintended pain the incident may have caused.

“If you think that my attitude hasn’t been correct or that there are things that I haven’t done well, I have no problem asking for forgiveness, although my goal wasn’t to harm someone else,” he said.

But Marta refutes Alfonso’s version of events – that he’d broken up with her before the broadcast and had been dating Alexia for a couple of weeks. Marta insist they were still a couple and had simply had a disagreement, Fox News reports. Marta described the incident as “unpleasant and shameful”.