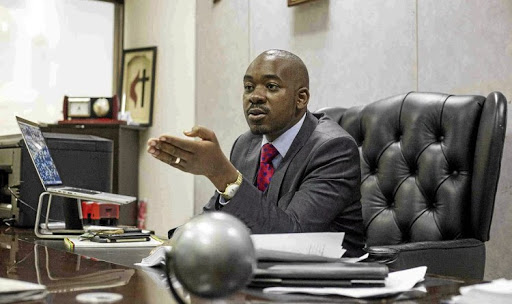 Chamisa was speaking to the media after touring Wilkins Infectious Diseases Hospital Monday to assess the country’s preparedness in handling the global outbreak of the infectious disease.

The opposition leader said Muchinguri’s comments were misplaced and were uttered during a “moment of madness”.

He said no politician, no matter what differences their countries had should wish bad for any nation.

“Well am sure very unfortunate, very misplaced and I think it’s something that hopefully she is going to withdraw because I think it was said in a moment of madness,” said Chamisa.

Reports say Covid-19 has so far killed more than 6 000 people across the world and cases are said to be increasing as the entire world grapples with the pandemic whose epicentre has shifted dramatically from mainland China to central Europe.

Zimbabwe is yet to record a confirmed case of the outbreak although neighbouring South Africa has hit 62 cases since last week.

Muchinguri-Kashiri torched a storm on Saturday when she described the Covid-19 as poetic justice on western countries for imposing sanctions on senior government and Zanu PF officials accused of rights abuses in Zimbabwe.

The Zanu PF national chair was speaking at a party rally in Chinhoyi.

However, Chamisa said Muchinguri should not look at such misfortune as something that is located in the politics of the day, as many people were dying, but should have sympathised with the families and victims of the virus.

“We would want to believe that as Zimbabweans, we do not wish any nation bad; we do not look at any such misfortune as a misfortune that is located in politics,” he said, adding, “This is purely about life, about health. We do sympathise with the families, the victims and our prayers are with those that have been affected wishing them well and also hoping that they wish us well because this situation requires a collective approach and togetherness as human beings.”