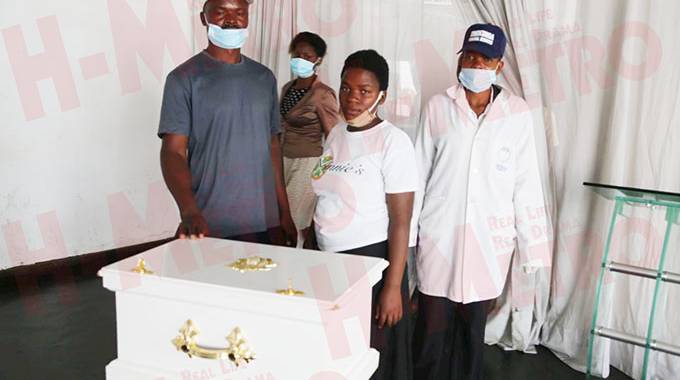 Missing baby body finally buried after 2 weeks of drama. Parents of the late minor -Nyasha Chikomichi and Violet Mutimutema -were accompanied by their daughter and her husband to receive the body from Tinokunda Funeral Services. The body of a minor, held by a funeral parlour for two weeks over unpaid bills, was on Monday buried at Mabvuku Cemetery following intervention by a well-wisher.

This followed assistance from the director of Enrage Holdings, who helped foot the bill. “I had lost hope but today I feel comforted over the assistance I received from Enrage Holdings who heard of my challenges during Tilder Live Show at Star FM radio.

“To be honest I had no money when my baby passed on and Covid-19 measures that limit number of mourners added salt to the wound. “I want to thank the funeral parlour for understanding me at last and they assisted me with a coffin and transport which I never expected following my misunderstanding with them.

“They accepted the blame and responded by suspending one of their drivers who wanted to collect money behind their back,” said Chikomichi.

Enrage Holdings finance and administration executive Tsungai Kuzvigadza paid $6 600 to cover charges that triggered the standoff.“My boss is the one who followed Tilder Live Show on Star FM radio, called me to tune in and instructed me to give a hand to the Chikomichi family. “We got into their shoes considering the time we are living and saw the need to bail them out since they had lost their child during hard times,” she said.

Tinokunda Funeral Services director Caroline Nyambiya confirmed the suspension of their driver Mukudzei Mhandu, 23, alleged to have been behind the confusion that led the Chikomichi family to seek assistance through the media and police.

“Nyambiya is now under suspension pending investigations following allegations that he was demanding money from the bereaved family when they were expected to be helped and make payments at the office,” said Nyambiya.

She added: “He acted in an unprofessional manner leaving the bereaved family to accuse the company of hiding the body, a thing we never did.

“We came to realise that our driver was blocking the bereaved family from reaching our offices for help in a way to dupe them and by this we are apologizing to Zimbabweans especially to readers of H-Metro who covered the story and followers of Tilder Live Show on Star FM radio.

“The company’s good name was misrepresented by one of our staff members who was after making money and access soft loan illegally. “All necessary procedures in handling the body were carried and the company was not enlightened about the challenges faced by the bereaved family,” said Nyambiya.