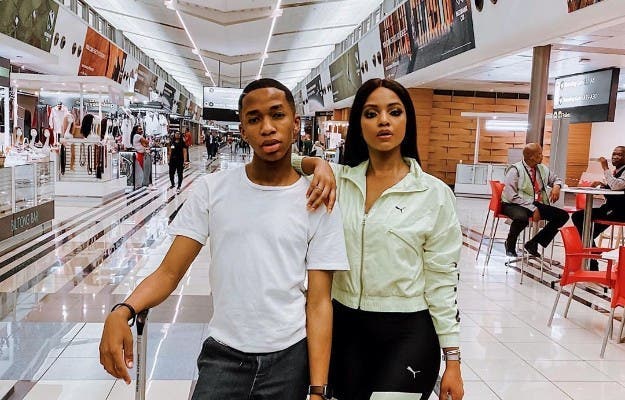 Mihlali Ndamase and Lasizwe Dambuza are arguably South Africa’s leading YouTube and social media influencers. Therefore, the friendship between the two has proven that two rulers can get along and form a genuine friendship that is based on celebrating one another. We mean, Lasizwe was the first person to give Mihlali her first opportunity at onscreen acting.

But during one of the episodes of her new reality show, Khanyi Mbau, was speaking on her trending interview with Pearl Thusi on BET’s “Behind the Story.” Khanyi let us in on some tidbits about the friendship of our popular influencers by suggesting that Mihlali had done something to make Lasizwe angry.

Therefore with that confession, we thought that meant the end of the two giving us what we want. But that was all laid to rest when the two reunited and shared the experience on social media.

Lasizwe took to Twitter and shared an adorable video of him nestled in Mihlali’s bosom. Their stories reveal that the two friends had spent the day together as each other’s “dates.” First they met up to have lunch and dinner together before painting the streets red. Mihlali looked snatched and continued to confirm that one thing about the beauty is the her waist is always snatched. She had paired the two-piece black outfit, with the newly launched and Adidas x Ivy Park “Drip 2” jacket that is very sought after.

I genuinely would sleep on @mihlalii_n chest… It’s the most comfortable experience ever! I am really a lucky gent! pic.twitter.com/s5fSH79NFR

The two seemed to have all the intentions of getting seriously inebriated together. They both took to Twitter to detail how their intention for the night was to manifest the broken girl. But they did not plan to do that alone, the two revealed that they were with reality star and newly revealed fashion designer, Bobby Blanco. Other guests that were present during the get-together.

Teachers Renew Their “Pay Us In USD” Bid