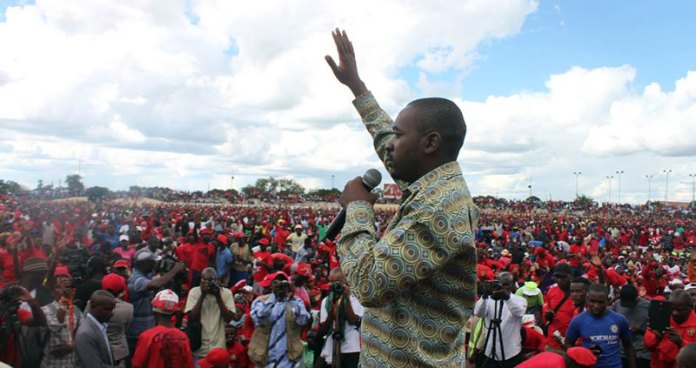 THE MDC has taken its campaign machinery into rural areas to challenge Zanu PF electoral dominance, with the opposition saying it is gearing to wrest power from President Emmerson Mnangagwa before the end of his five-year term.

Over the weekend, party leader Nelson Chamisa was in B

indura, where he addressed thousands of supporters, while his deputy Tendai Biti crossed into Nyanyadzi in Chimanimani to address rallies and challenge Zanu PF’s rural hegemony.

Chamisa said his party had developed a rural strategy, which would see the opposition set up strong structures and begin developmental projects to challenge Zanu PF and show that it is the alternative.

“We are going to be in the rural areas, helping the communities, build bridges where there are rivers, ensuring that we share the problems and burdens of our people in the countryside. We cannot afford to have our presence removed from the people,” he said.

Addressing supporters in Bindura, Chamisa promised a new beginning, telling his supporters that it was now time for bravery in the face of an unrelenting clampdown on anti-government protests by the ruling elite.

“We need to be brave, it is time for us to put bravery ahead of everything else because we are almost getting there. We are about to deliver freedom to this country, a new beginning and prosperity, the dawn is upon us. Let us not give up hope, let us keep pressing,” he said.

Chamisa has been pushing his supporters and other non-MDC players to join in national protests to constitutionally oust Mnangagwa from power before 2023.

He has pledged that his party will bring out it’s A game against the sitting government even if blood shed appears inevitable.

Biti, speaking in Nyanyadzi, said the MDC would roll out the Development and Urbanisation of Rural Areas (Dura) programme to ensure a convergence of the countryside and cities.

“Dura is an urgent national agenda. It is sad that 40 years after independence, 70% of Zimbabwe has no electricity, piped water or modern ablutions. This is an indictment of the regime. The dual enclave of the economy must go,” Biti said.

The MDC said it would ensure that once it took over governance, it empowers locals by building a strong economy that can support jobs and dreams even in the rural areas, thereby removing food aid as a political weapon.

“We need foreign direct investment from America, from the European Union, from everywhere in the world to rebuild our economy and empower our people. The only people who can create that trust and confidence for companies to invest in Zimbabwe is the MDC. Who can put their money into a government led by Emmerson Mnangagwa,” Biti said.

The MDC has since tasked deputy organising secretary Happymore Chidziva to lead its rural penetration strategy with the hope of upstaging Zanu PF.

Chidziva said he was busy planting and re-energising the rural structures to ensure that the party was ready to win the next polls.

“We have noticed that Zanu PF inflates numbers in the rural areas and uses fear, threats and food as a political weapon. We can’t allow this to continue. Therefore, we are now occupying that space and resisting the violence by protecting our own people,” he said.

Chidziva said demonstrations should not only be concentrated in urban areas, adding that the MDC would also ensure that resistance of poor governance and theft of elections came even from rural areas.

During the last politburo meeting, Mnangagwa instructed his party to solidify its hold in rural areas, where the party gets over 80% of its votes.

He even instructed government to take resources and developmental programmes to the countryside, as the battle for 2023 general elections begin to roll out.