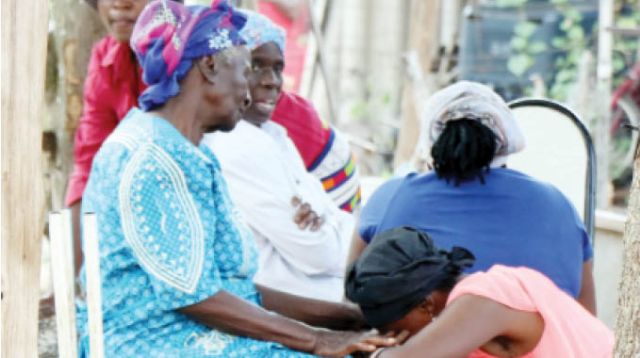 Bulawayo’s Entumbane residents were left dumbfounded after a man crushed his 83-year-old father to death following an argument over over non-payment of utility bills.

Thabani Ncube (47) has since been arrested after he reportedly bludgeoned his father Mitsho Ncube with boulders after his old man had inquired why he was not paying utility bills when the tenants were paying the rentals. Ironically, the Entumbane residence belongs Mitsho who had since moved to the family’s rural home, leaving his son in charge.

For failing to pay the utility bills for more than four months, Thabani blames his father who he accuses of casting evil spirits on him. Witnesses recounted the chilling incident:

“We are shocked as a community. We witnessed it all. It was as if he was possessed by some spirit. Ukhulu was busy shaving under the tree and Thabani was mending a shoe a few yards from him. He just asked his father why he was staring at him and threatened to hit him.

The next thing he stood up and picked a stone and attacked his father. The old man fell into the drainage trench and then his son picked a boulder and used it to crush his head,” said a neighbour who declined to be named.

“He started shouting obscenities accusing ukhulu of bewitching him. We tried to restrain him and people were screaming on the road. We tried to walk him away from the scene but he escaped from us and went back to the old man. He picked up a bigger boulder, straddled him and crushed his head with it, killing him instantly. We watched as the old man gasped for air. It was sad, and his own (Thabani’s) children witnessed it too. I doubt I will ever get to sleep well again after seeing this.”
After killing his own father, Thabani reportedly handed himself over to Entumbane police station.

Police say they have opened investigations into the matter.

NPF’s Only Member Of Parliament Dies