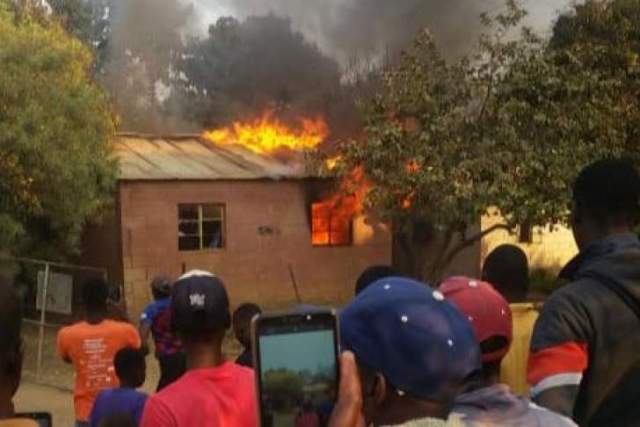 A local man burns down girlfriend’s family house over a 40 rand dispute. The assailant has been identified as Felix Moyo (25). Family spokesperson Miss Sibongile Nzimande said the family lost everything as Moyo was threatening to kill anyone who dared to enter the burning huts to remove property.

A 108-year-old man from Bulilima district, Matabeleland South Province is appealing for help after his homestead was torched by his granddaughter’s boyfriend.

She said Moyo disappeared after the arson and by then everything had been reduced to ashes. “Felix is a neighbour’s child and was in love with my sister Miss Nobesuthu Nyathi (25) who is eight months preg_nant with his child. Their dispute started when they were at Bagani Business Centre,” she said.

Miss Nzimande said Felix torched all the family’s four huts including the one in which their 108-year-old grandfather Mr Lewis Phiri was sleeping in with his 66-year-old wife, Mrs Esinathisina Phiri.

“Our grandparents Mr Lewis Phiri and his wife Esinathisina were sleeping when this happened and grandmother managed to wake up and helped khulu to escape. We almost lost a nine-year-old child whom we had forgotten in one of the huts,” she said.

Mr Phiri said he has been reduced to a destitute and appealed to well-wishers to help his family. “This boy wanted us dead. We have nowhere to start from or go. We have no shelter, food or clothes and the rains are falling. We are now like baboons. “I cannot afford to rebuild the torched huts because of old age and I am also ailing,” said Mr Phiri.

He said his family was already struggling before the latest development which has made the situation worse. Chief Ndiweni said they have temporarily moved the family to Ndiweni council business centre where there are two empty houses.

“It is just a temporary measure because the family is indeed in need of help. I am appealing to the people of Zimbabwe to assist the family,” he said. Miss Nobesuthu Nyathi said the dispute with her boyfriend was over 40 rand.

“Someone asked me to plait her hair at the shopping centre and she paid me 40 rand. He was drinking beer at the centre with friends and then he requested that I buy him beer. I bought him one calabash as I wanted to buy groceries with the rest of the money. He wanted me to spend all the money on beer hence the dispute,” she said.

The councillor for the area Councillor Nanny Ndlovu appealed for help from well-wishers saying the family’s situation was desperate.

“This is a disaster and a painful situation for the family. He might not have killed them physically but he has destroyed their lives because he left them with nothing. As a community we are not able to provide all their needs,” she said

Clr Ndlovu said the family urgently needs building material, clothes and food. She said well-wishers can contact her on 0776 982 854. Matabeleland South police spokesperson Inspector Loveness Mangena said she had not yet received report on the incident. – MyZimbabweNews