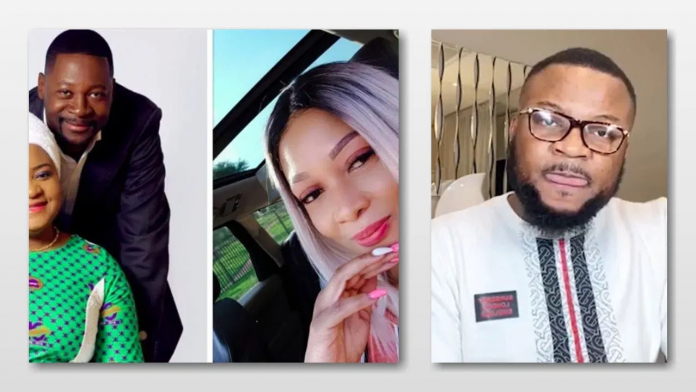 FORMER ‘fake’ prophet Jay Israel has been exposed in a secretly recorded video conspiring with a woman to claim she was Prophet Emmanuel Makandiwa’s girlfriend or second wife in Johannesburg, South Africa.

The video which was secretly recorded shows Jay Israel rehearsing for a live video to smear and shame United Family International Church leader Prophet Emmanuel Makandiwa in a planned US$1 million heist.

Evidence Chari presents the disturbing video showing how the two attempted to dupe Makandiwa and blindfold his followers.

Blessing Muzvongwi Mashangwa, a former member of Prophet Makandiwa’s church, is the brains behind the extortion attempt.

Blessing Mashangwa made headlines a few years back when together with her (then) husband Upenyu Mashangwa, they sued Prophet Emmanuel Makandiwa of the United Family International Church. The Mashangwas sued both Makandiwa and his with Ruth over alleged false prophecies. They demanded a massive $6.5 million from the couple, alleging that they had made significant losses because they had believed in Makandiwa’s “false” prophecies.

A secret video recorder was covertly planted on the television set and the recording was done without her knowledge.

The video starts with Jay Israel, while rehearsing, asking where they met to consummate their relationship.

“I think the main agenda is like it is said that confess your sins unto one another and you feel like just confessing so you can move on with your life…” the woman responds.

She goes on to plot sensational claims that would really destroy Makandiwa’s reputation and the idea is to push him in a corner so that he is forced to buy their silence with US$1 million in cash.

“I will swear with Zoe (her daughter), If ever I slept with Makandiwa may thunder strike them

“I swear with the most precious two precious people in my life Zoe and Emmanuel”, she props her testimony.

In the second part of the video, Blessing Muzvongwi tells Jay Israel what to say in the Live video.

“You actually start by saying, ‘I said Lukau will go, I prophesied Bushiri will go, I am prophesying now that the third one who will go is Emmanuel Makandiwa.”

She continues, “I am sitting here with claims of 1400 people amounting to US$12 million… He will call and say J, my brother, come.

These non-existent claims are supposed to scare Makandiwa and force him into coming into an arrangement.

This video is so shocking:

The fraud allegations against the Makandiwas were dismissed last year after the High Court said the claims were false, frivolous and vexatious. However, the Mashangwas appealed the High Court decision at the Supreme Court. The Supreme Court has since reserved judgement on the matter after hearing from the lawyers.

This is the major reason, the woman was so eager to go on with their plans with Jay Israel.

Jay Israel had to fake arrest and harassment by South African police to hide his shame after he cancelled his live broadcast meant to expose Makandiwa was interrupted when he received this video on his phone.-Harare Live

JUST IN: Obadiah Moyo Has Been Arrested By ZACC