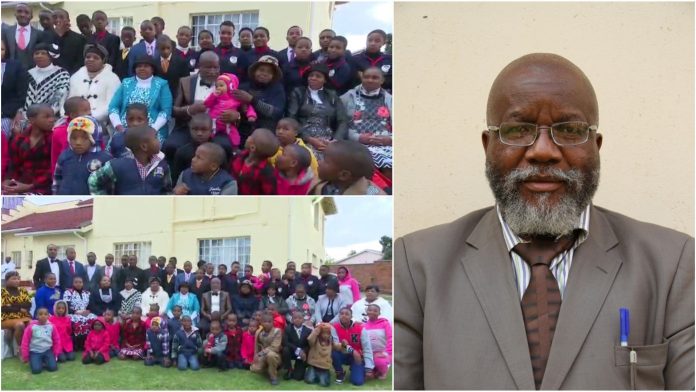 Zimbabwean politician and former member of parliament for Mutasa North constituency Luke Phibion Masamvu died on Saturday from Covid-19 related complications. The prolific ruling Zanu PF legislator, who was affectionately known as Tsoka, left behind a massive 79 children and 12 wives. Masamvu was 62.

The former legislator was a well-known businessman in Marondera, Bindura and Manicaland Province. Mourners are gathered at the family’s Airedale Farm along the Rusape-Nyanga Highway. However, only 30 people will be allowed to gather for the funeral due to the Covid-19 lockdown regulations.

Family spokesperson and brother to the late businessman, John Masamvu told state media, that the family was devastated by the loss.

“It is a very sad day for the entire Masamvu family. We have lost a big family man who also served his country in Parliament,” Masamvu’s close friend, Misheck Mugadza, told the Sunday Mail.

“We have lost an accomplished businessman, a family man and personal mentor. Mr Masamvu’s deeds testify to the kind of a man he was.”

“I was really saddened to learn of the untimely passing on of the former Honourable MP and businessman Cde LP Masamvu. I am praying for the family at this trying time. Losing a loved father is not easy at all. The wound never heals. My prayer for the family is that they find the strength to keep going.”

In an interview with national broadcaster ZBC a few years back, Luke Masamvu revealed that at the time he had 28 children in primary school, 10 children in high school and 10 children at various universities around the country. Several children had already graduated from tertiary education institutions while a significant number were still toddlers.

Masamvu revealed that his own father had passed on at 61 years of age and left behind 49 children and 11 wives. At the time, the prolific dad said that his target was to have not more than 65 children.

Explaining how he managed to run such a huge family, Masamvu said, the key was respect and love. He said that his wives were mothers to all the children and that all the children regardless of age, called all his wives “Mom” and were not allowed to use names like “Aunt” or “Step Mother”.

This was confirmed by his first wife Madeline Masamvu who said that her husband treated all his wives equally. She also said that the children had difficulty in distinguishing their biological mothers because they received the same love from all the women.

Jacob Zuma in prison because of lack of an education

Madam Boss Hospitalised After Accident On Her Way To Makhadzi Show