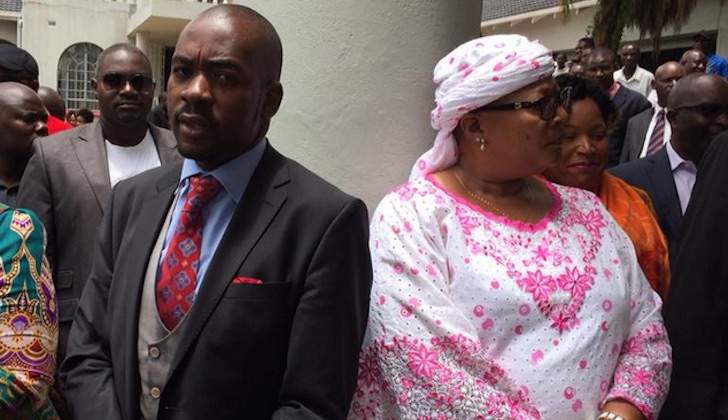 ACTING MDC leader Thokozani Khupe, pictured, and her team are unrelenting in their assaults on Nelson Chamisa and his top allies — signalling yesterday that they are now planning to sack 30 more party legislators from Parliament and to take over all the main opposition’s provincial offices.

Khupe’s associates told the Daily News yesterday that the party’s interim leadership was miffed by a recent challenge by 51 MDC legislators who had approached the High Court seeking an interdict to stop their mooted recalls from Parliament.

This comes despite indications at the weekend that concerned MDC bigwigs are trying afresh to get Khupe and Chamisa to finally smoke the peace pipe — amid clear signs that the dispute has now reached a critical point for the country’s largest opposition party.

The mindless infighting intensified after the Supreme Court recently upheld a March High Court ruling which nullified Chamisa’s hotly-disputed ascendancy to the helm of the party, following the death of its much-loved founding father Morgan Tsvangirai in 2018.

Interim national chairperson Morgen Komichi told the Daily News yesterday that while some of the party legislators who had supposedly approached the High Court had told them that they were not consulted when the action was filed, the MDC expected them to “expose the fraud in court” — if they were not to be recalled.

“A good number of them are distancing themselves from the court challenge. They came to us and we have said they must then sign sworn affidavits to expose the fake application.

“Those who do not do that and choose to continue to align with the MDC Alliance … will be recalled because that is what the constitution of the party says,” he said.

However, some party insiders said Khupe’s interim leadership had no power to recall some of the targeted MPs as they are said to belong to small alliance parties which went into an agreement with the MDC for the purposes of contesting the 2018 elections together.

Apart from seeking to recall the targeted MPs, Komichi also said they were moving with speed to occupy all the party’s provincial offices which were currently under the control of the Chamisa faction.

“We will take everything that belongs to us as we have done with Morgan Richard Tsvangirai House (formerly Harvest House),” Komichi told the Daily News.

All this comes as Khupe and Chamisa have been involved in an ugly brawl for control of the party since the death of Tsvangirai from colon cancer in February 2018.

The fights took a turn for the worse after the Supreme Court upheld an earlier High Court ruling in March, which nullified Chamisa’s hotly-disputed ascendancy to the helm of the MDC following Tsvangirai’s death.

In addition, Khupe has also recalled 21 MPs and senators from Parliament, as she flexes her muscles in the mindless infighting.

The ugly brawling was further brought to the fore last week when some misguided yobs harassed and tried to beat up Khupe when she joined other mourners at Chamisa’s mother’s funeral in Gutu.

The disgraceful scenes — which once again laid bare the MDC’s senseless wars and the depths to which the party has plumbed in recent years — only died down when the grieving Chamisa intervened personally.

Khupe was among scores of high-profile mourners who had come to grieve with the Chamisa family, following last week’s sudden death of the MDC Alliance leader’s mother.

Amid growing internal concerns about the bloodletting in the main opposition party, as has been consistently highlighted by the Daily News and the Daily News On Sunday over the past few months, it emerged at the weekend that there are renewed efforts to get Khupe and Chamisa to finally bury their long-running feud.

Khupe’s spokesperson Khaliphani Phugeni all but confirmed the impending talks when he told our sister publication, the Daily News On Sunday at the weekend, that unity between Khupe and Chamisa would “revive our party to a level where it can be able to achieve what it was formed for”.

“What I know is that when Chamisa’s mother died, his people called Khupe to inform her as well as to confirm if she would be coming.

“After that, Khupe called Chamisa who appreciated the gesture. While I am not aware of the unity talks, would it be a bad idea if they worked together?

“Isn’t it that unity will revive the party and enable it to achieve the goals for which it was formed? All opposition parties should work together,” Phugeni told the Daily News On Sunday.-Daily News