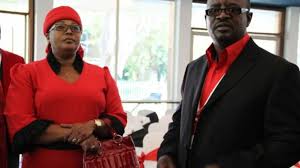 Khupe is reportedly keen on recalling 30 proportional representation legislators to create space for her own allies in the legislature, a move which Mwonzora is opposed to.

An unnamed official who attended the MDC-T’s virtual National Council meeting held on Saturday told The Standard that Khupe intends to get into Parliament and assume the position of leader of the opposition in the National Assembly, a position that was rejected by MDC Alliance leader Nelson Chamisa in 2018. The official is quoted as saying:

Khupe will possibly go it alone and recall the MPs herself next week.

Mwonzora does not want to recall the MPs because he wants to use them in his bid to win the presidency.

He has no supporters in the MDC-T and hopes to use the carrot-and-stick approach on those MPs fearing recall on his way to the presidency.

Khupe is watching him closely. She realised that and wanted to use (yesterday’s) council meeting to force for a resolution to recall them so that the cunning Mwonzora will not go to court over the issue.

The Constitution says that when a seat is vacated for one reason or the other, this would automatically trigger a by-election.

However, the law does not provide for by-elections for seats reserved for the Women’s Quota and Senate.